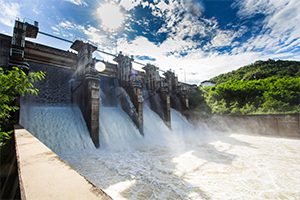 Roughly 70 percent of the earth’s surface is covered in water. Given the fact that water’s natural movement is strong and consistent, it is a perfect source for clean, renewable energy. But with a significant portion of the world’s energy stemming from fossil fuels and with it as the focus of the energy debate, it’s not often we hear about hydropower. As a result, many are left unaware of the capabilities and ultimately, our progress towards making it a more prominent part of our everyday lives is made more difficult. To change that, more about one of the oldest forms of power is featured below.

The following is energy information about hydropower:

Hydropower is a form of energy that is created by the movement of turbines that is caused by the flow of water, which also involves the use of a generator. The turbines use the motion from the water and the energy that it supplies in order to generate electricity, though the amount of energy that is generated is determined by several factors including the amount of flowing water and the height that it falls from. This electricity can be used subsequently to power homes and businesses. The fact that water is the source of energy created with hydropower means that it is necessary for hydroelectric power plants to be situated near a source. Sometimes plants will even recycle water and pump it back up through the dam in order to be ready to supply energy during peak usage periods.

How Long Has Hydropower Been In Use?

Running water has long provided power to humans. The Greeks used water wheels to grind wheat over 2000 years ago, according to the U.S. Department of Energy. The Chinese also used water as a method for hulling grain and breaking ore. Since then, there have been a handful of different methods developed for harvesting water’s power. Hydropower has been used in the United States since the 1800s and the Francis Turbine, the most commonly-used water turbine utilized today, was invented in 1849. In 1879, the largest hydropower facility of the time was created at Niagara Falls, and by 1881, scientists harnessed the falls to power the streetlights in the town. Since then, hydropower has continued to grow.

Today, hydropower can be used to saw wood and power entire manufacturing facilities. In terms of renewable sources of energy, hydropower is the most widely accepted form in the world. In the United States, every state uses hydropower for electricity, though the amount of it that is consumed varies from one state to another as it constitutes over 10% of the energy produced within several.

How popular is hydropower?

In the United States, hydropower is especially popular in the Pacific Northwest. In fact, 70 percent of the electricity produced in Washington state comes from hydropower facilities, according to National Geographic.

As with all forms of energy, hydroelectricity has a number of positives associated with its use. Once a dam or hydroelectric facility has been constructed, it has a strong and never-ending supply of energy. Dams especially can be used to create electricity on-demand and hydroelectricity is one of a handful of clean energy sources that does not produce harmful byproducts in the same way that burning coals or other fossil fuels do. Additionally, the reservoirs created by dams can create opportunities for boating and other activities that would be difficult or impossible otherwise. Another important fact to note is that hydropower is cheaper than other energy forms, a factor that can fuel its adoption, ignoring the initial investment required.

Even given its benefits, hydroelectricity is not perfect. The large-scale construction required to build a dam or water power facility often displaces people and animals living in the area and makes the watershed more susceptible to flooding. On top of that, the actual cost of construction can be high. Dams also create a huge obstacle for fish, especially salmon, who swim upstream to reproduce. Although dams can minimize the impact they have on the environment by building in features to make the trip easier on fish, the general scientific consensus is that dams and hydropower facilities are not good for fish and other marine life. Because dams disrupt these natural environments, they can also cause changes in water chemistry that can have adverse impacts.

The Future of Hydroelectricity?

History shows that hydropower can go a long way in transforming economies. In Brazil, investment in hydropower allowed the nation to reduce their dependence on imported fossil fuels, which reduced the cost of electricity and contributed to massive growth in the nation’s economic status, according to the International Hydropower Association.

Hydropower remains popular in developing nations across Africa, Asia and South America, but is falling out of favor in Southeast Asia due to environmental, economic and social concerns. Despite the popularity of hydropower as a renewable energy source, there are concerns worldwide over the long-term reliability and viability of hydropower projects. Some believe that global warming is and will continue to change rainfall patterns, making dams and turbines less predictable and reliable, according to Slate.

Investment in hydropower facilities has remained flat over the past few years, while investments in solar and wind energy projects have steadily increased, according to Circle of Blue, a research organization focused on water and other resources. This shift signals that wind power could overtake hydropower as the leading renewable energy source within the next few years.

Even with the uncertainty associated with its use in the future, there is no denying that hydroelectricity is a viable method for minimizing the environmental impact of energy use. As we continue to seek out new ways to power our world and gradually phase out fossil fuels, the long-term savings that hydroelectricity enable, combined with its impact within areas currently underutilizing it, have considerable potential. As more are able to see that, the question will no longer be what is hydropower, but rather how quickly will its use grow.

Hydropower is a renewable source of energy that will help power our world into the future.

To learn about other sources of energy or find a provider that supplies it affordably, visit paylesspower.com. Offering cheap energy plans to suit both personal and business needs, Payless Power is a company committed to providing people not only with some of the best cheap electricity rates in Texas, but also with helpful customer service. Visit the website to learn more about how to save electricity at home, or connect with the online community on Facebook, Twitter, and Instagram.