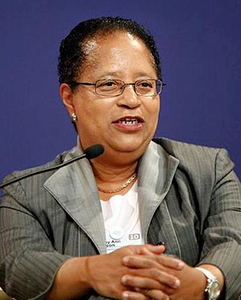 Shirley Ann Jackson was born August 5, 1946, in Washington, D.C. When she was young, Jackson’s mother would read to her the biography of Benjamin Banneker, an African-American scientist and mathematician who helped build Washington D.C. Her father encouraged her interest in science by offering a helping hand with school projects. Jackson also grew up during the Space Race, which piqued her interest in science and discovery. She attended Roosevelt High School, where she took accelerated math and science classes. She graduated as valedictorian in 1964 and applied to the Massachusetts Institute of Technology (MIT). Jackson was among the first African-American students to attend MIT, and was only one of two women in her graduating class.

While at MIT, Jackson experienced prejudice as both a minority and a female, and was socially isolated for most of her undergraduate career. After Martin Luther King Jr.’s assassination in 1968, Jackson helped organize a group of African-American students who ultimately became MIT’s Black Student Union. The formation of the Black Student Union helped open a dialog with the school and lead to the creation of a Task Force of Educational Opportunity. Jackson was asked to serve on the task force, which aimed to attract more minority students and professors, and focused on improving life for minorities at MIT. In 1973, Jackson graduated from MIT with a Ph.D. in theoretical elementary particle physics, becoming the first African-American woman to receive a Ph.D. in the university’s history.

After receiving her degree, she took a job as a research associate in theoretical physics at the Fermi National Accelerator Laboratory, or Fermilab, where she studied medium to large subatomic particles. She specialized in hadrons, which are subatomic particles with a strong nuclear force. Two years later, Jackson traveled to Switzerland where she served as a visiting science associate at CERN, the European Organization for Nuclear Research. It was here that Jackson worked on theories of strongly interacting elementary particles. When she returned to Fermilab in 1975, she was immediately elected to the MIT Corporation’s Board of Trustees.

In 1976, Jackson started working on the technical staff for Bell Telephone laboratories in theoretical physics, where she focused on the electronic properties of ceramic materials. The hope was that these materials could act as superconductors of electric currents. During her time at Bell, Jackson met her husband, Morris A. Washington, and was appointed as a professor of physics at Rutgers University. In the next few years, Jackson became president of the National Society of Black Physicists (1980) and a member of the New Jersey Commission on Science and Technology (1985).

While at Bell Laboratories, Jackson was credited with breakthroughs in telecommunications research. During her time at Bell, she authored or collaborated on over 100 scientific articles. Her research enabled others to invent portable fax machines, touch tone telephones, solar cells and fiber optic cables. She is considered a leading developer of caller ID and call waiting on telephones.

In 1995, Jackson was appointed by President Clinton to the chair of the Nuclear Regulatory Commission, where she developed and implemented standards for assessing risk at the nation’s nuclear plants. She helped form the International Nuclear Regulators Association in 1997, and in 1998 was inducted into the National Women’s Hall of Fame.

Leading at Rensselaer Polytechnic Institute and Beyond

In 1999, Jackson became the eighteenth president of Rensselaer Polytechnic Institute (RPI), where she continues to lead today. Similar to her efforts as as student at MIT many years ago, Jackson is helping to create a more diverse student body. During her presidency at RPI, the proportion of female undergraduates has gone from 24 percent (1999) to 32 percent (2017).

Although Jackson has been a tremendous force of leadership at RPI, her influence extends past the campus limits. She’s has served on the board of both IBM and FedEx. Jackson also served on the President’s Council of Advisors on Science and Technology (PCAST) from 2009 to 2014, and then co-chaired President Obama’s President’s Intelligence Advisory Board from 2014 to 2017. While serving in these capacities, she led studies on advanced manufacturing in the United States, and dealt with issues of national and global security, cybersecurity and digital technology.

In 2014, President Obama awarded Jackson the National Medal of Science.

To learn more about Shirley Jackson, check out the video below: