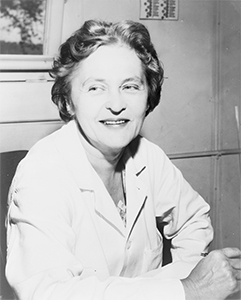 Mária Telkes is a Hungarian-born American physical chemist and biophysicist. Telkes was born in 1900 and was raised in Hungary. She studied physical chemistry at the University of Budapest, where she earned a Bachelor’s degree in 1920 and a Ph.D. in 1924. After graduation, she became a professor at the university. Shortly after beginning work as a professor, the young Telkes decided to immigrate to the United States. She came to America and began working as a biophysicist at the Cleveland Clinic Foundation. She worked alongside surgeon George Washington Crile to create a device that recorded brain waves. In 1937, Telkes became a United States citizen.

After becoming an American citizen, Telkes took a position as a research engineer at Westinghouse Electric where she focused on building instruments that could convert heat into electrical energy. It was around this time that Telkes’ interest in solar energy was piqued. She joined the Solar Energy Conversion Project at the Massachusetts Institute of Technology (MIT), where she worked along other scientists to develop thermoelectric devices powered by sunlight.

During World War II, Telkes was assigned to the U.S. Office of Scientific Research and Development, where she created her most important and famous inventions: as solar distiller that could vaporize seawater and re-condense it into drinkable water. The device was used on Naval lifeboats and helped save the lives of torpedoed sailors and downed airmen. The technology was also used in larger-scale operations, such as providing clean water in areas that were short on supply.

Telkes remained on staff at MIT after World War II and became an associate research professor in metallurgy in 1945. For the rest of her career, Telkes continued to develop and patent solar-energy applications. In 1948, she and American architect, Eleanor Raymond, designed and constructed the world’s first modern residence heated with solar energy in Dover, Massachusetts.

She continued to improve upon the technology of that first house and went on to create solar stoves and heaters. In 1953, Telkes was awarded a $45,000 grant from the Ford foundation to create a universal solar oven that could be used for people living at all latitudes. She also helped develop materials that could endure extreme temperatures in space.

In 1980, she helped the U.S. Department of Energy develop the world’s first solar-electric residence in Carlisle, Massachusetts.

Over her sixty-year career, Mária Telkes earned numerous awards for her contributions to science and engineering. In 1952, Telkes became the first recipient of the Society of Women Engineers Achievement Award. Twenty-five years later, she received both a lifetime achievement award from the National Academy of Sciences’ Building Research Advisory Board and the Charles Greeley Abbot Award from the American Solar Energy Society for her contributions to solar-heated building technology. In 2012, she was posthumously inducted into the National Inventors Hall of Fame.