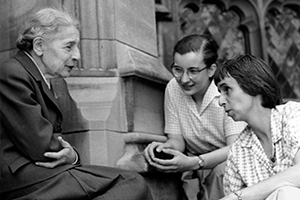 Lise Meitner was an Austrian-born physicist whose research focused on nuclear physics and radioactivity. As a child, she excelled in science and mathematics during a time when women did not attend school past the age of 14. She filled her education gap with the help of private tutors before eventually enrolling at the University of Vienna, where she became the second woman in the world to earn a doctorate in physics.

After graduating, Meitner spent time in Berlin studying under Otto Hahn and Max Planck. She then spent her next 30 years working closely with Hahn at the Kaiser Wilhelm Institute for Chemistry in Berlin, where she is credited with discovering the protactinium isotope (1918) and the Auger Effect (1922). She went on to become Germany’s first female physics professor at the University of Berlin.

Meitner’s nuclear physics research program at the University of Berlin ultimately led to her and Hahn’s discovery of nuclear fission, the process through which uranium atoms are split. Both Meitner and Hahn became highly-regarded scientific researchers and were nominated for the Nobel Prize for ten consecutive years. After the theory of nuclear fission started to spread, Meitner and Hahn began preparing a set of experiments to test nuclear fission. However, all of this was occurring during the rise of Nazi Germany, and Jewish-born Meitner fled to Sweden where she continued her research and correspondence with Hahn. Hahn’s execution of the experiments the two developed led to a Physics Nobel Prize in 1944 for his scientific research into fission, but unfortunately Meitner’s contributions were largely ignored this time around.

As Meitner began to understand the impacts that nuclear fission could have, she realized that the science had a destructive potential and published a warning to other scientists. This alarmed other scientists because they knew the Germans had access to the information. However, Meitner’s published warning led to the U.S. Manhattan Project, which is responsible for the atomic bomb. The U.S. government asked Meitner to help with the project, but she refused because she did not want to be involved in using her discovery for destruction.

After World War II and Hahn’s Nobel Prize in Physics for the discovery of nuclear fission, Meitner continued her research in Sweden and helped develop the nation’s first nuclear reactor. In 1960, Meitner retired and moved to the United Kingdom. In 1966, Meitner, Hahn and another scientist shared the U.S. Department of Energy’s Enrico Fermi Award for the discovery of nuclear fission. Meitner died in 1968 at the age of 89.

Along with her tremendous contributions to nuclear research, Meitner’s name lives on today in other ways as well. Element 109, meitnerium, is named for Meitner, along with asteroids and craters on Venus and the moon. As her tombstone says, Lise Meitner will always be remembered as “a physicist who never lost her humanity”.

To learn more about Lise Meitner and the discovery of nuclear fission, check out the video from SciShow below.