Grace Hopper (1906-1992) – Mathematician, Naval Admiral and the Queen of Software 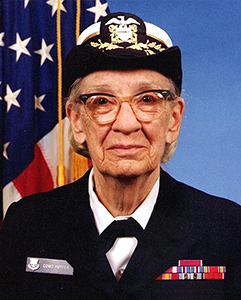 Grace Hopper was born Grace Brewster Murray in New York City in 1906. From a young age, she had an analytical mind and was known to take apart and reconstruct the clocks in her home. She attended Vassar College, where she graduated with a degree in mathematics and physics in 1928. After graduation, she accepted a position as an assistant professor at Vassar while she furthered her education at Yale University. At Yale, she earned both masters and doctoral degrees in mathematics, making her one of the first women to attain such a high degree of education in that field.

After Yale, Hopper went back to Vassar as a full-time professor where she taught mathematics for ten years. When World War II started, Hopper signed up for the WAVES program (Women Accepted for Volunteer Emergency Service), which was the first program to expand women’s wartime involvement outside the fields of nursing and administration. Hopper was accepted to WAVES and the U.S. Naval Reserve in 1943, and was assigned to the Bureau of Ordnance Computation Project at Harvard University, where she learned to program a Mark I computer. The Mark I was the first electromechanical computer used in wartime and the first computer of its kind to be produced in the United States. Working on the Mark project sparked Hopper’s interest in computers, and signaled the beginning of a long career in computer programming.

Hopper officially finished her active duty service in 1946, but stayed on as a naval contractor and continued to work on the Mark II and III computers at Harvard. While working on the Mark II, Hopper discovered a glitch when the machine when it unexpectedly shorted out. Upon opening the machine, Hopper and team discovered that a moth had caused the issue, and had to be removed for the machine to function properly. This lead to the idea of “debugging” a computer, which is still a widely-used term in the computer development industry. Although there is debate about whether Hopper coined the term, she certainly helped popularize the term during her career.

In addition to her naval career, Hopper also worked in the private sector. In 1949, she joined the Eckert-Mauchly Computer Corporation, where she designed an improved compiler called the UNIVAC. Compilers are devices that translate the instructions provided by computer programmers into binary code (series of zeros and ones) language that a computer can understand, and without the UNIVAC compiler, the Apollo space missions would have been impossible. However, Hopper believed that computers were able to be programmed in English, not just binary code. Hopper proved her theory in 1957, when she and her division developed the Flow-Matic, a compiler that used the English language to process data. The Flow-Matic is the basis of COBOL, the widely-used common business-oriented language. Hoppers greatest developments in computer programming built the foundation on which all modern-day computer software is built.

Hopper retired from the naval reserves in the 1960s after 20 years of service. However, her military retirement didn’t last long. Less than a year after her retirement, the Navy asked Hopper to come back and help standardize COBOL (common business-oriented language) for the Navy. Hopped worked for the Navy for an additional 20 years before finally retiring in 1986. Upon her retirement, Hopper was a rear admiral and the oldest serving officer in the entire Navy. After her second retirement, Hopper continued to work in the computer industry until her death in 1992.

During her lifetime, Grace Murray Hopper was honored with countless awards and designations. In 1961, she was elected as a fellow to the Institute of Electrical and Electronic Engineers. Eight years later, she was named the first computer science Man of the Year by the Data Processing Management Association. A few years later in 1973, she became the first person from the United States, and the first woman of any nationality to be made a Distinguished Fellow of the British Computer Society. Finally, in 1991, Hopper was the first female to be awarded the National Medal of Technology. In 2016, President Barack Obama posthumously awarded Hopper the Presidential Medal of Freedom. Additionally, Hopper holds honoree doctorate degrees from over 30 universities.

Hopper is remembered for her contributions to computer programming through places and awards named for her. In 1997, the U.S. Navy commissioned a guided missile destroyer named for Hopper, the U.S.S. Hopper. The University of Missouri has a computer museum on campus that showcases early computers and components, which is designated “Grace’s Place” in honor of Hopper. Additionally, the Association for Computing Machinery still offers a Grace Murray Hopper Award to one outstanding young computer professional of the year, selected on the basis of a single recent major technical or service contribution. Finally, the Grace Hopper Celebration of Women in Computing Conference is a technical conference held each year encouraging and celebrating the women in the computing industry.

Despite all of her accolades, Hopper believed that her greatest accomplishment was all of the young people she trained during her lifetime as a teacher and Naval officer.

To see Grace Murray Hopper in action, check out her appearance on Late Night with David Letterman after her retirement in 1986.