What is Nuclear Energy? 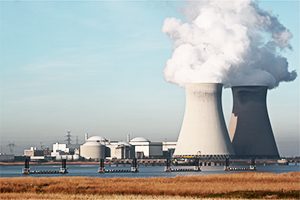 Over the past few years, the debate over climate change and how to best address America’s energy needs has introduced the nation to buzzwords like fossil fuels, fracking and renewable energy. With greater circulation of these terms in everyday use, the world has also seen a greater adoption of renewable forms of energy such as wind and hydropower. But among the alternatives, it seems that one energy source doesn’t get talked about until something goes wrong. Nuclear energy. Many people are unable to even answer the question “what is nuclear energy?” In reality, nuclear energy can offer a number of benefits and by providing more information on it, the hope is that it will no longer be seen as a potential danger and instead a viable means of powering our world.

What is nuclear energy and how does it work?

During nuclear fission, a neutron collides with a uranium atom, splitting the atom and releasing a large amount of heat and radiation. The split creates more neutrons and enables more collisions between neutrons and uranium atoms. This causes a nuclear chain reaction. This chain reaction is controlled by power plants to produce a specific amount of heat. Put simply, when the atoms are split in the reactor, water becomes steam which will begin to turn the turbine and create electricity.

There are a number of benefits to relying on nuclear energy as this form of power does not release emissions as other sources of energy do. This fact means that there is virtually no damage done to our planet, helping to mitigate the effects of climate change. It also means that the air that those in the area breathe in is cleaner and safe to inhale. Beyond that, nuclear energy is capable of creating jobs, as its careful maintenance and support requires diligent workers who are capable of using it in order to address the needs of individual residents and corporations. This factor is enough to stimulate local economies nationwide as well.

Another beneficial facet of nuclear energy is its expense. Though it represents a costly endeavor initially in order to construct the actual nuclear power plant and convert the fuel into a usable form, generating electricity in a nuclear reactor is less expensive than doing so using gas, coal, and oil. The promise of nuclear energy also acts as a benefit as being armed with a better understanding of it will enable greater control over the process and access to nearly unlimited energy. Though this will take time and further research, figuring it out will offer our world a source of nearly endless renewable energy.

How safe is nuclear energy generation?

A number of high-profile meltdowns in the past few decades have ignited the fight against nuclear energy. The largest meltdown in United States history occurred in 1979 at Three Mile Island in Pennsylvania when a non-nuclear system failure led to the release of radiation. Although the meltdown has had no detectable health impacts on plant workers or the public, the incident showed the need for better operating procedures at nuclear plants worldwide.

The largest breakdown in world history occurred in 1986 when the Chernobyl plant in Ukraine melted down. The incident was rated a seven out of seven on the International Nuclear Event Scale due to the large size of the radioactive cloud. The effects of the meltdown caused widespread health issues for citizens and animals, and devastation of plant life within a 30-mile radius of the plant.

Most recently, a meltdown at Japan’s Fukushima stations was triggered by an earthquake and subsequent tsunami when the natural disasters caused a breakdown in the plant’s cooling mechanisms. This breakdown released radioactive steam into the atmosphere and spilled radioactive water into the ocean. A large number of workers were exposed to elevated radiation levels, and a handful were exposed to emergency-level amounts of radiation.

These three incidents certainly highlight the safety concerns about nuclear energy production, but they represent the only major accidents to have occurred. These meltdowns were triggered by electrical and mechanical malfunctions, human error and uncontrollable natural disasters. However, when controlled a nuclear plant is a useful means of supplying clean energy. Worldwide, nuclear energy is used in over 30 countries and findings have reaffirmed that it is indeed a safe way to create electricity.

How does nuclear power impact the environment?

Despite the safety concerns over nuclear meltdowns, a properly-functioning nuclear plant has far less impact on the environment than energy produced from fossil fuels. In order to produce one million kilowatt (1,000 MWe), a coal-powered power station consumes three million metric tons of coal and produces seven million metric tons of waste. A nuclear station, on the other hand, uses only 25 metric tons of uranium and produces one metric ton of radioactive waste that gets solidified for disposal, according to the World Nuclear Association.

Although there is less waste produced from nuclear energy, mining the uranium needed for nuclear energy has an equal impact on the environment as mining coal. However, mining uranium has an additional element of danger due to radioactivity. Traces of radioactive material can get into groundwater and impact surrounding areas. Although these impacts are scary to think about, the safety concerns of nuclear energy are similar to concerns about oil drilling and coal mining.

Overall, just like fossil fuels, if uranium and nuclear energy are safely mined, responsibly processed, and waste is properly disposed of, the benefits of nuclear energy will help mitigate the risks.

How popular is nuclear energy?

Nuclear energy has experienced peaks and valleys of popularity since it was first used commercially in the 1950s. According to the World Nuclear Association, 11 percent of the world’s electricity is generated from nuclear fission of uranium in nuclear reactors. The United States produces the most nuclear energy worldwide, with France being the only other relatively close to producing the same amount.

In the United States, nuclear fission accounts for about 20 percent of the electricity generated in 2016, according to the U.S. Energy Information Administration. There are roughly 100 operating nuclear reactors in 61 nuclear power plants across 30 states in the United States. Although nuclear energy only accounts for about one-fifth of all electricity generation in the U.S., requests and applications to build new nuclear power facilities are still being submitted. The United States Nuclear Regulatory Commission (NRC) has an intense review process that helps ensure the safety of new nuclear facilities, but that process takes a long time to complete.

According to the International Atomic Energy Agency, nuclear power generation is expected to increase worldwide between 2020 and 2050. Low-end estimates cite a 17 percent increase by 2030, whereas more aggressive predictions believe a 94 percent increase is possible, effectively doubling the world’s nuclear energy generation and consumption in as little as 15 years. Although the nuclear power industry will continue to grow, the safety and environmental tradeoffs of nuclear energy will surely be debated for years to come.

Nuclear Power in the Future

While it is easy to come to the conclusion that the risks of nuclear energy outweigh the benefits, the capabilities of our world today, in addition to all that nuclear power has to offer, should have us hesitate to make that assumption. Especially as we continue to explore different routes of renewable forms of energy, it is hard to deny that nuclear energy’s ability to supply continuous power while refraining from exposing the atmosphere to harmful gases is not advantageous. Though we may be a few years off from tapping into the full potential of nuclear energy, the promise of what it can offer should be enough for us to reconsider it as a means of generating electricity for everyday use.

Nuclear energy could provide our world with the energy it requires.

To get answers to questions along the lines of “what is nuclear energy” or to find a provider that supplies energy affordably, visit paylesspower.com. Offering cheap energy plans to suit both personal and business needs, Payless Power is a company committed to providing people not only with some of the best cheap electricity rates in Texas, but also with helpful customer service. Visit the website to learn more about how to save electricity at home, or connect with the online community on Facebook, Twitter, and Instagram.