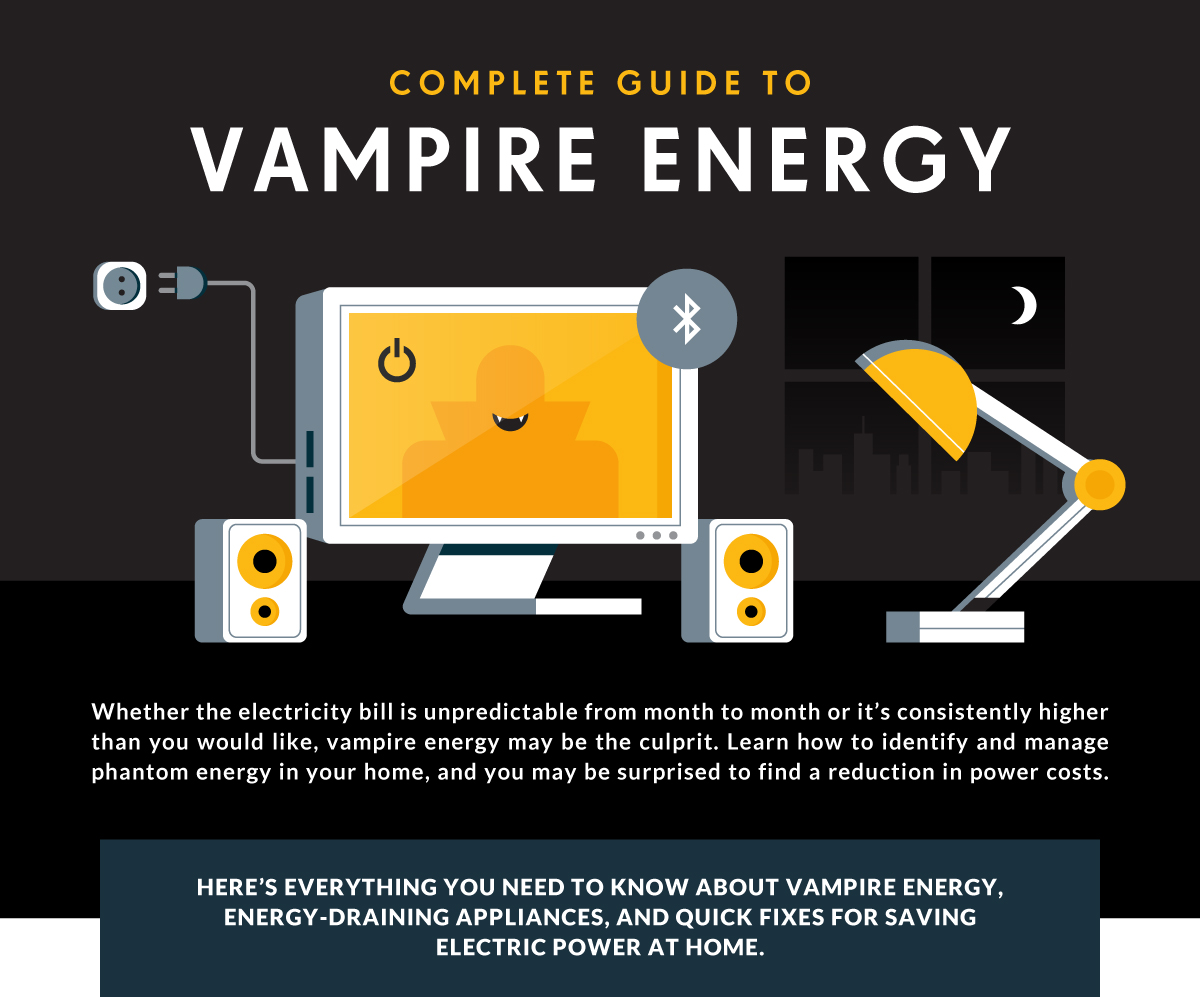 Whether your electricity bill is unpredictable from month to month or it’s consistently higher than you would like, vampire power may be the culprit. Learn how to identify and manage these “power suckers” in your home, and discover ways to save money and help the planet. Here’s everything you need to know about energy-draining appliances and quick fixes for a more energy-efficient home. 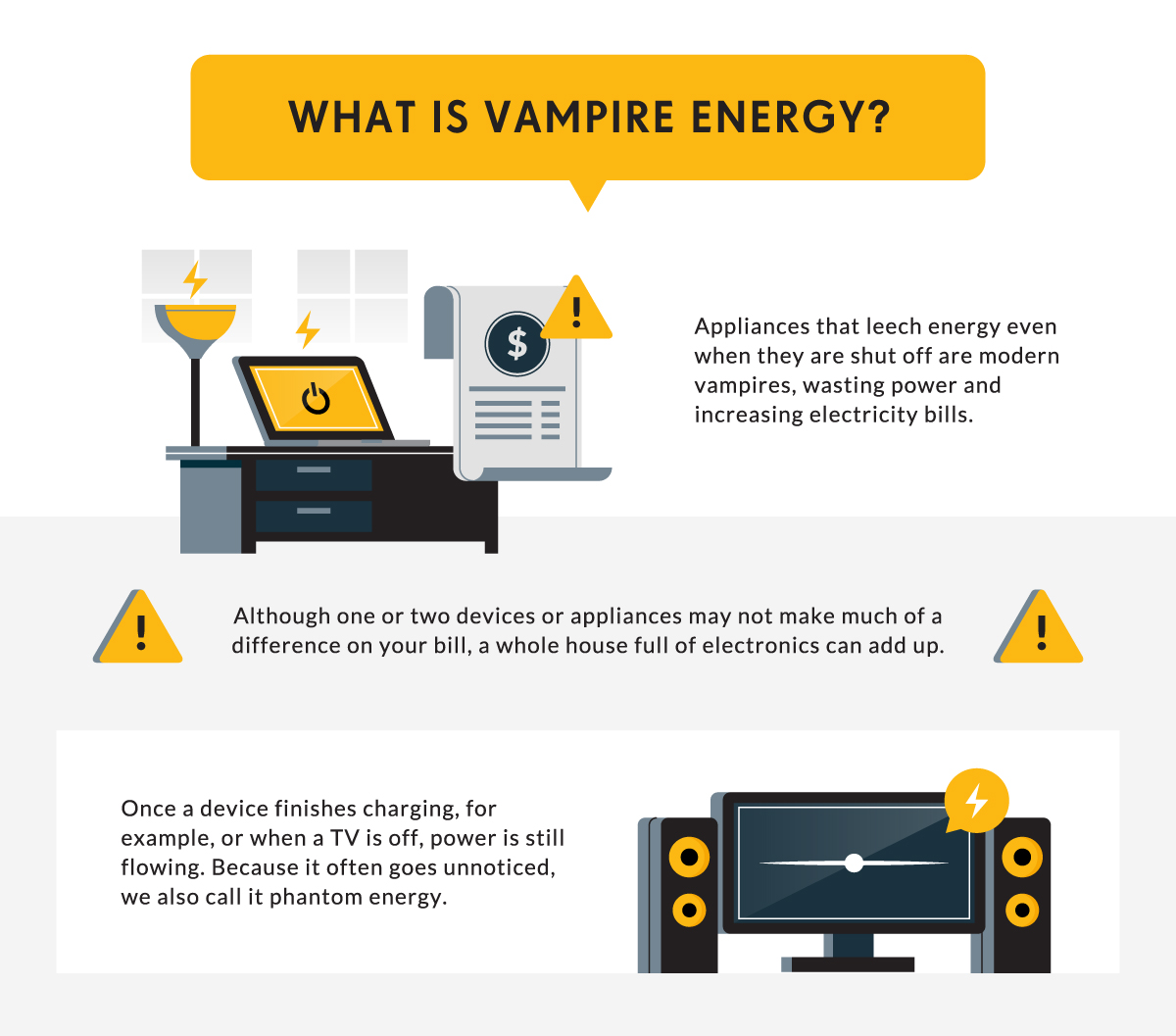 What is Vampire Energy?

Vampire power (also called phantom power or standby mode), in which appliances consume energy even when they are shut off, can account for up to 20% of your monthly electricity bill. While sitting unused and idle, your TV or toaster oven is sucking money right out of your pocketbook.

Why Do Devices Leak Energy?

Essentially, every cord that remains plugged into an outlet is still using an electric current. While many devices have sleep or standby modes, they continuously use energy to perform updates, connect to remote servers, and record data.

The connectivity of modern technology is one reason why devices leak energy. Even when the TV is off, for example, it’s still ready to receive a signal from the remote to power on at any time. Your DVR is always “lying in wait” until it’s time to record the next show or running behind-the-scenes updates.

Regularly available power means your devices can respond quickly when you decide to use them. However, this handy feature comes at a cost regarding your monthly and yearly electricity costs. Most households have many devices that use vampire power in standby mode. 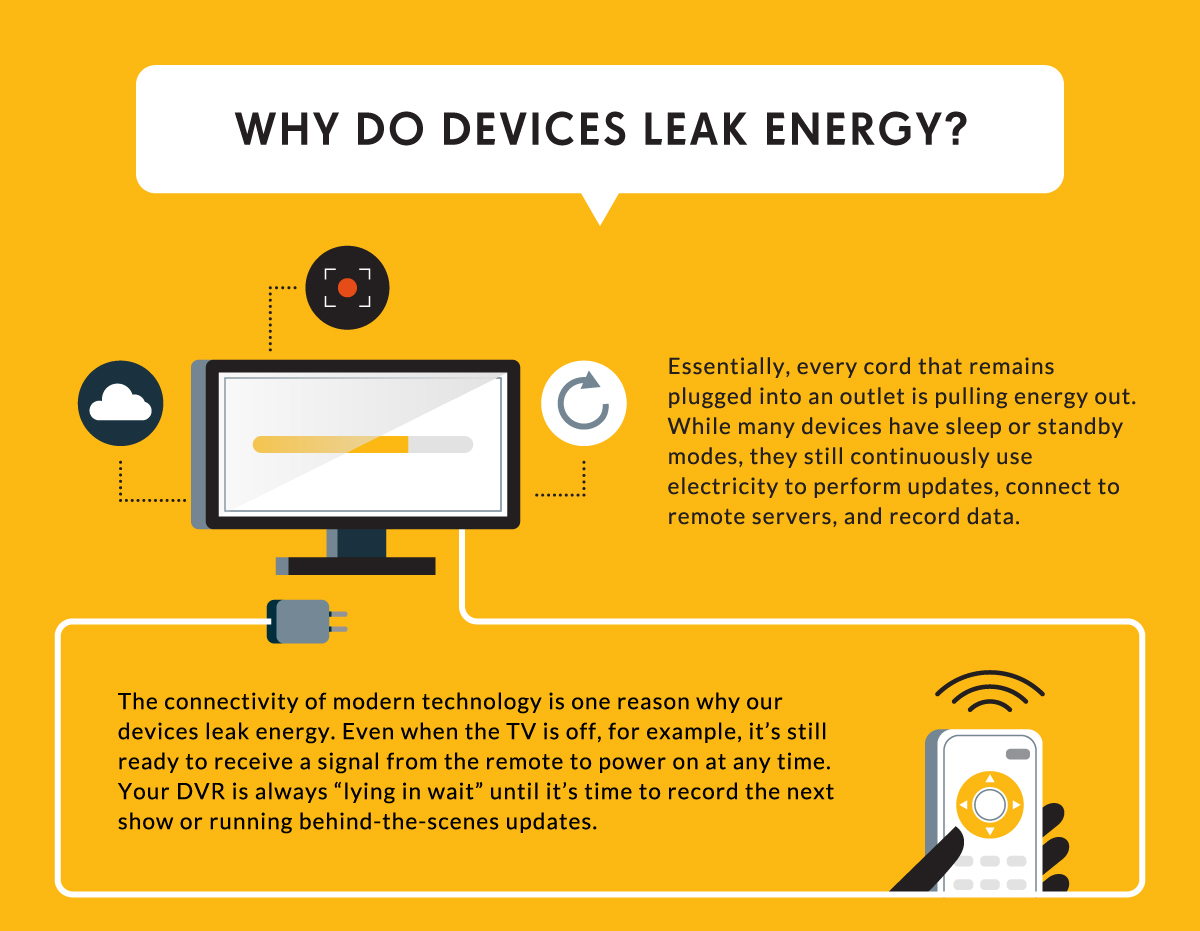 Remote ready appliances are those which remain in a standby state ready to receive orders to switch on. Often, these devices require a one-button operation to wake them. Common remote-ready appliances that “leak” electricity include: 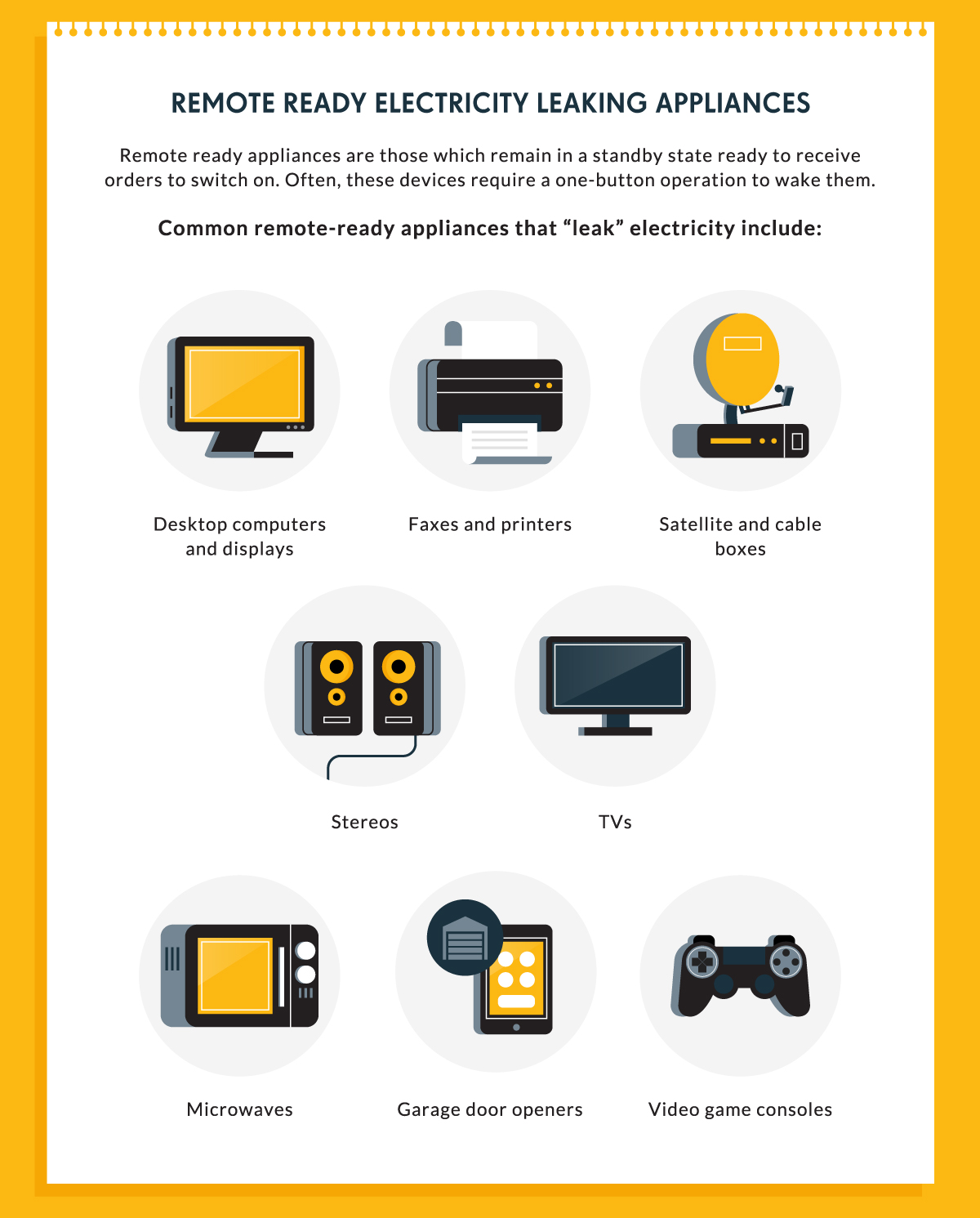 For some devices, the “on” and “off” electricity loads are almost identical. For example, a TV on standby is 48.5 watts, while an in-use LCD computer monitor uses 55 watts when in use. Unfortunately, that means you may be doubling (or more) your monthly bill by leaving remote ready devices in standby mode rather than switching them all the way off.

Non-remote appliances that waste energy due to being on all the time don’t have standby or sleep modes. Rather, the electricity that is used to power background functions even when you’re not operating them. 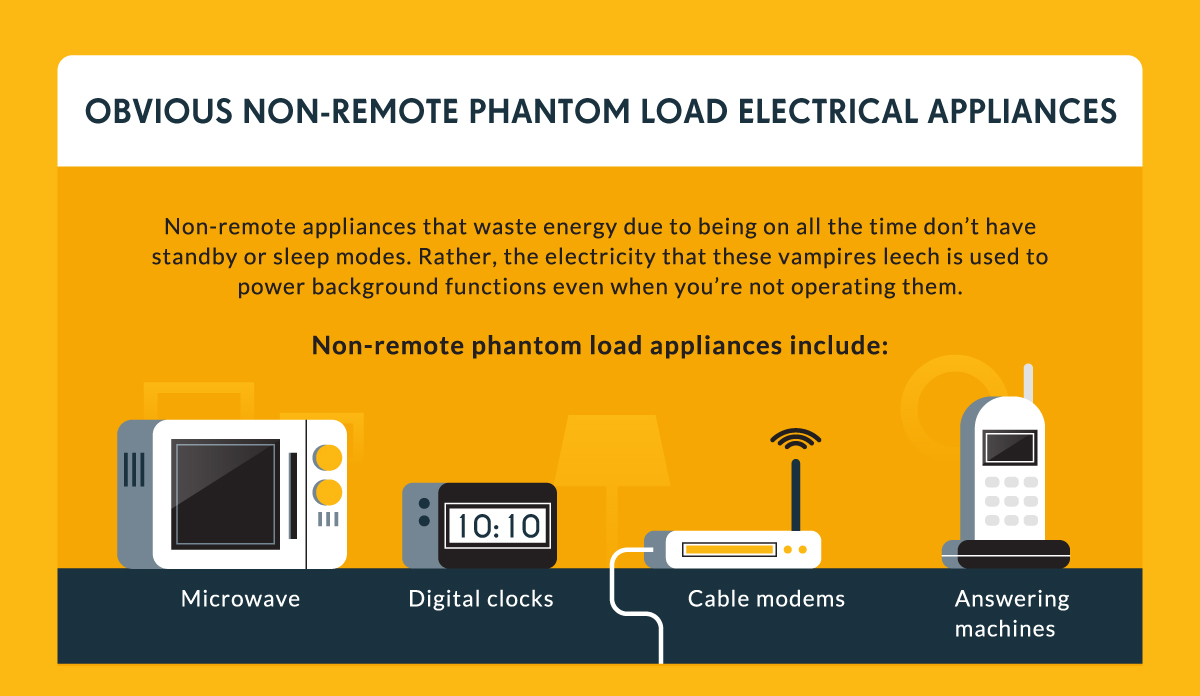 Though you may decide to unplug your microwave between uses, many other non-remote appliances are ones that need to remain on. Digital clocks, for example, need a constant power source to maintain accurate time. Cable modems and internet servers have the same requirement of needing connection 24/7.

Finally, many other menaces exist in your home when it comes to energy use. Most devices that use the highest amount of power while sitting on the counter, shelf, or table are ones you would least expect. 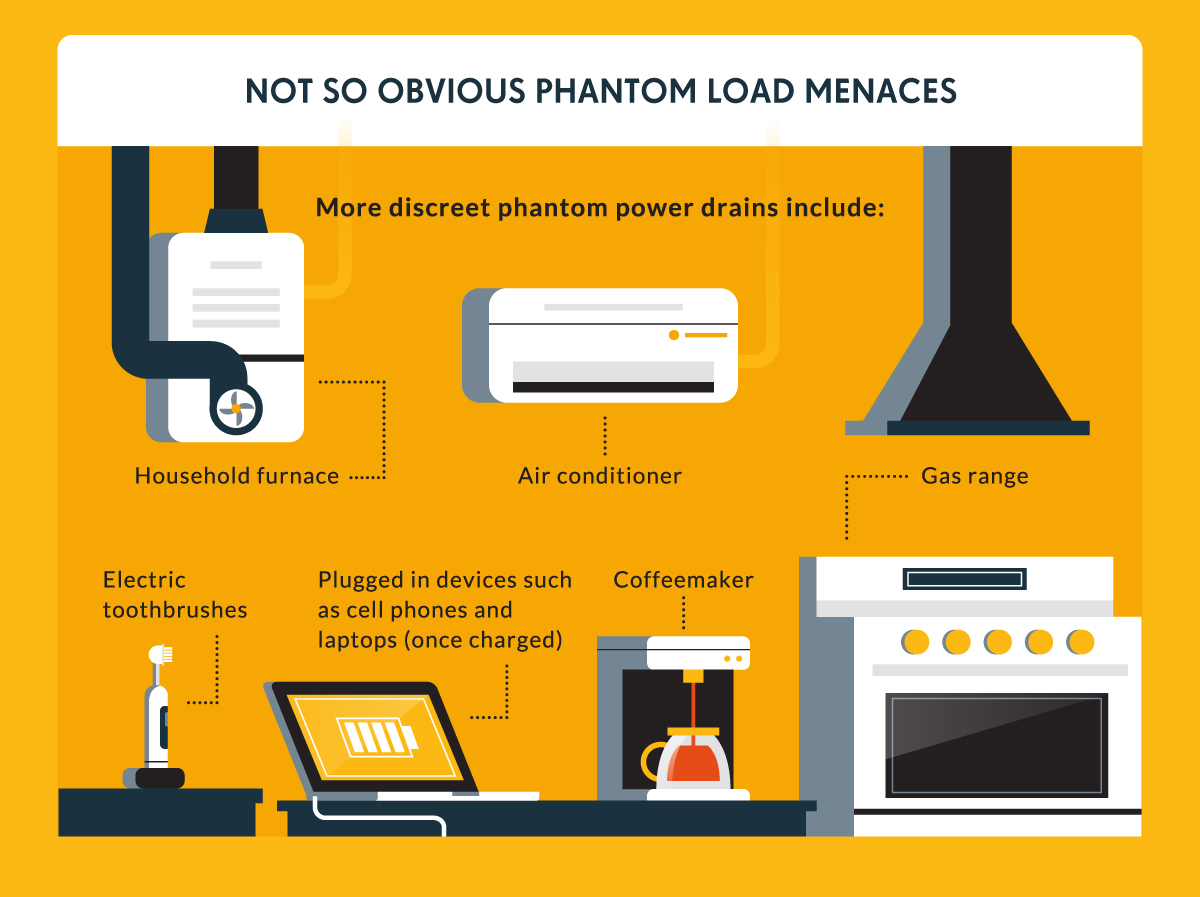 Although avoiding power drain from these sources is unavoidable, such as with a furnace or gas range, you can take steps to reduce or eliminate these sneaky devices.

HOW MUCH ENERGY IS IT COSTING YOU?

According to a report from the National Resource Defense Council, Americans spend about $19 billion per year on vampire energy costs. On average, that means about $165 to $440 per household depending on electricity rates and location.

With so many digital devices, device drain is constant and inescapable unless you’re willing to unplug every device in your home after you use it. When it comes to what appliances use the most electricity when turned off, those are mostly modern appliances and devices with digital displays and internet connectivity. Other electronics without digital indicators and clocks, such as lamps and toasters, do not use power when turned off. 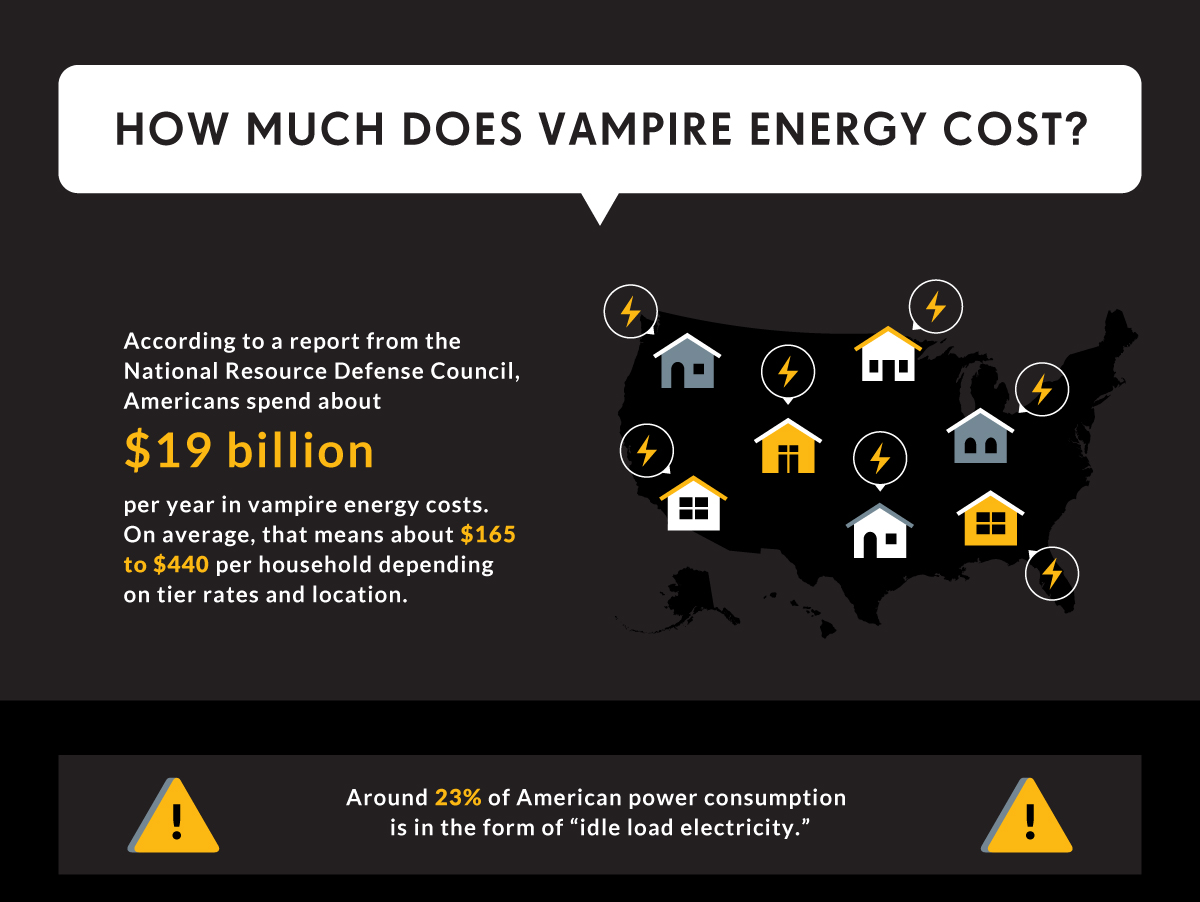 As green as you may think your household is, the truth is that most Americans are victims of sneaky phantom power in their homes. As the National Resources Defense Council (NRDC) explains, around 23% of American power consumption is in the form of “idle load electricity.”

Unfortunately, electricity usage and costs only continue to grow. Other studies indicate that it may account for up to 20%of home electricity use. Smart devices with extra features may harbor some of the responsibility for the increase, like smart refrigerators with  extra features like internet connectivity drawing additional power.

And while energy-efficient appliances are becoming more common, we’re still seeing surges that are off the charts in terms of excess power that consumers are continuing to pay for.

Look at the chart of some of the largest vampire power offenders, then look around your home. Wattage information comes from Berkeley Lab’s Standby Power Summary Table. 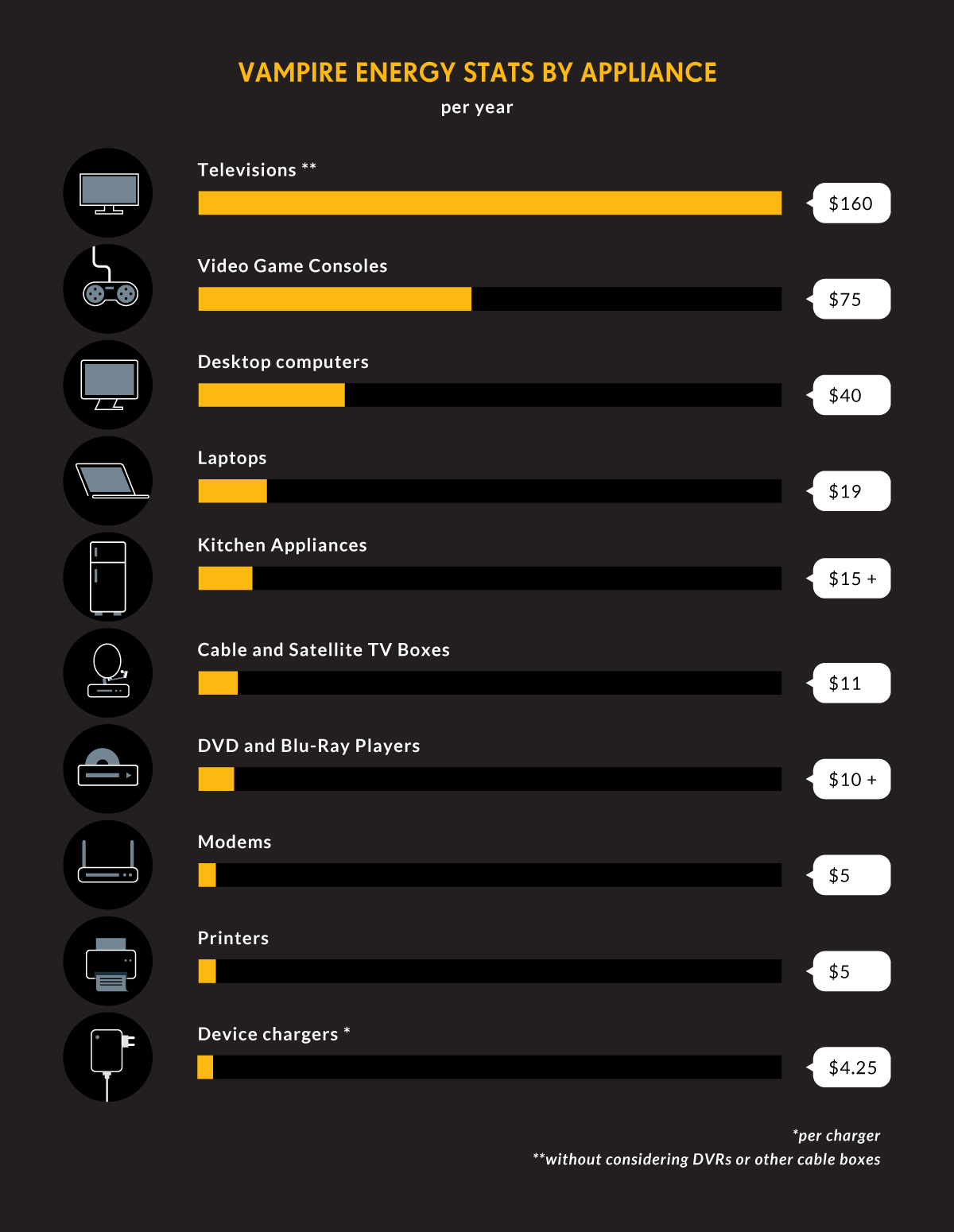 How to Stop Vampire Power Drain

Does unplugging electronics save electricity? Yes!  But in today’s interconnected world, it’s not often feasible to unplug every appliance when you’re finished with it, including internet modems, refrigerators, digital clocks, and more. For larger appliances, we must turn to other electricity-saving methods to cut back. But the benefits are clear; studies have found that phantom electricity accounts for anywhere from 5 to 10%of household electricity. Here are five ways to stop phantom power appliances. 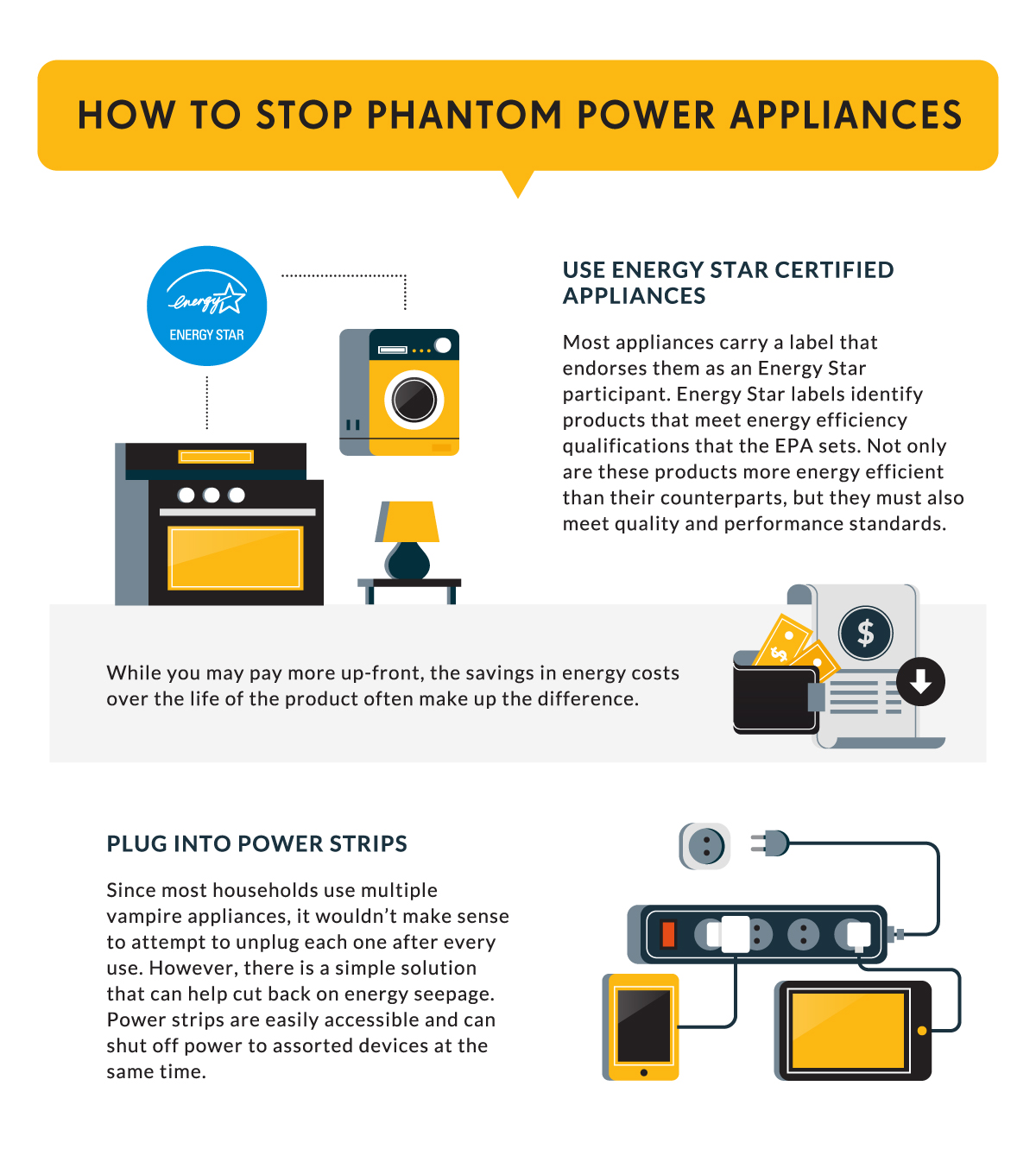 While you may not want to rush out and purchase all-new appliances, shop smart when the time comes to replace an outdated refrigerator or washing machine. Most appliances carry a label that endorses them as an Energy Star participant. Often, the labeling also includes expected power costs.

Energy Star labels identify products that meet electric efficiency qualifications set by the EPA. Not only are these products more efficient than their counterparts, but they must also meet quality and performance standards. While you may pay more up front, the savings in electricity costs over the life of the product recoup your costs in a few short years and pay off in lifetime electricity savings.

Since most households use multiple phantom appliances, unplugging every device during your evening routine doesn’t make a lot of sense. However, a simple solution can help cut back on electricity seepage: using power strips, including smart power strips. Electric power strips are easily accessible and can shut off power to assorted devices at the same time.

Rather than manually unplug each device or flip a light switch, you can press one button to cut off power to a bank of appliances. If you own a desktop computer, you may already use a surge protector power strip to protect your device’s components. Using power strips elsewhere in your home can help consolidate cords and make saving electricity even simpler. Take it a step further by investing in advanced (smart) power strips that can detect when devices aren’t in use or are programmable to automatically shut off. Read more about advanced power strips here.

Since most households today have multiple smartphones, laptops, or tablets, charging these devices often takes precedence over conscientious power consumption. At the same time, many users leave their devices to charge overnight or for extra hours during the day. But modern technology means faster charging times and once a device is powered up, it often maintains its charge when in standby mode even when unplugged.

While you won’t want to unplug every appliance in your home each day, identifying the ones you use less frequently can help zero in on phantom energy draws. For example, the refrigerator needs constant power for food safety and your health, but if you only use the microwave every few days, unplugging it after each use may benefit your bank account.

Practical Steps for Saving Each Month

Take a power inventory in each room to see what sneaky phantom power devices are at work. A few smart changes from the guide above can help you reduce your energy waste and vampire power consumption. One author saved a third on her electricity costs, and another saved 22% by reducing vampire electricity devices. Discover more ways to save and become a savvy energy conservationist with Payless Power’s prepaid electricity plans. 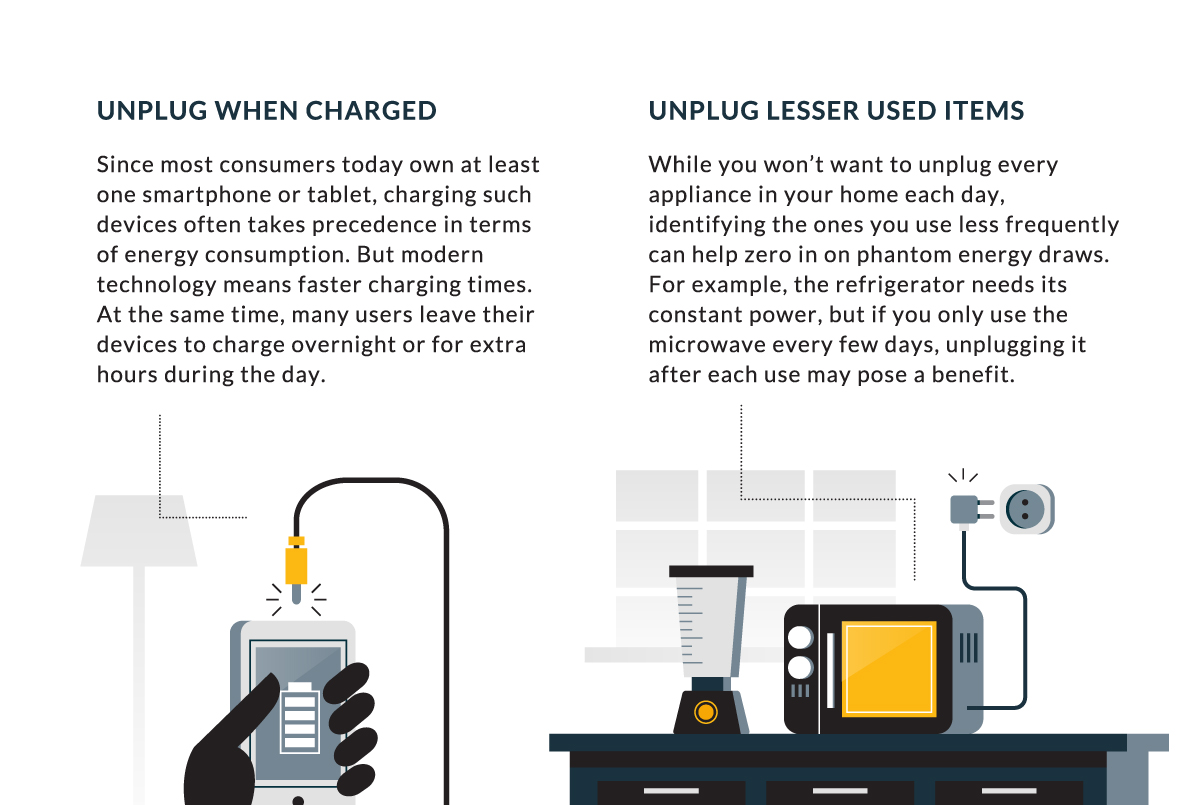