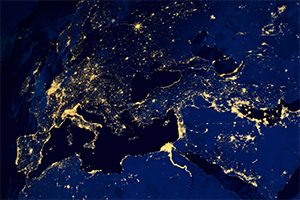 The United States uses more electricity than almost every other country in the world (except China). However, how does the U.S. compare to other countries in cost for electricity? In 2014, Americans paid 10.00 cents per kilowatt hour, on average, according to WorldAtlas. That makes the U.S. the 13th most expensive country to pay for electricity. But, which countries are more expensive, and why? Find out below.

Denmark pays more for power than every other country in the world. Data from 2013 estimated that price per kilowatt hour was around 39 cents/kWh, and separate data from 2014 estimated electricity costs at 41 cents/kWh in Denmark and 35 cents/kWh in Germany, according to OVO Energy. That means that Danes and Germans pay between three to four times more than Americans pay for power. The high cost for power has been linked to government policies that help green energy. For example, Germany hopes to produce 80 percent of their electricity via renewable sources by 2050, but the expansion of renewable energy and decrease in non-renewable sources is creating an energy gap and affecting prices, according to Forbes.

Although different data sources place Spanish energy costs at different costs, Spain is certainly in the top five most expensive countries for electricity. Although this data places Spain at number five in terms of expense, when adjusted for average household income, Spain moves to number three. A recent report by the International Energy Agency found that Spain actually taxes households who generate renewable energy at home, despite the fact that Spain would be a good candidate for solar energy.

At between 15 and 21 cents per kWh, Italy pays more for electricity than a lot of other places, according to data compiled by Statista. The cost for electricity is high because fossil fuels are largely used to produce electricity in the country, and most of those fuels need to be imported from other nations, such as Libya, Russia and Algeria. These high prices not only impact families, but are also causing a big headache for Italy’s small and medium-sized businesses, which pay 40 percent more for power than the rest of Europe, according to Reuters. Although that number is more than double what Americans pay for electricity, the 2014 averages actually show a decrease since 2011, when Italians paid an average of 28 cents per kWh, according to OVO Energy.

Ireland’s high cost of energy pulls the entire United Kingdom block into one of the most expensive areas for electricity. While the UK overall is estimated to pay between 15 cents and 20 cents per kilowatt hour for electricity, Ireland on it’s own ranges closer to 25 cents per kilowatt hour, according to data from Eurostat. Historically, UK households have signed up for fixed electricity tariffs, which locks their price per kilowatt hour. With those fixed tariffs phasing out, more citizens are being switched to a variable tariff, where their prices fluctuate. This has lead to price increases up to 28 percent, according to The Guardian.

What do you think about the cost of electricity in Europe? Share your thoughts with us on Facebook!