Where to Save on Your Electric Bill 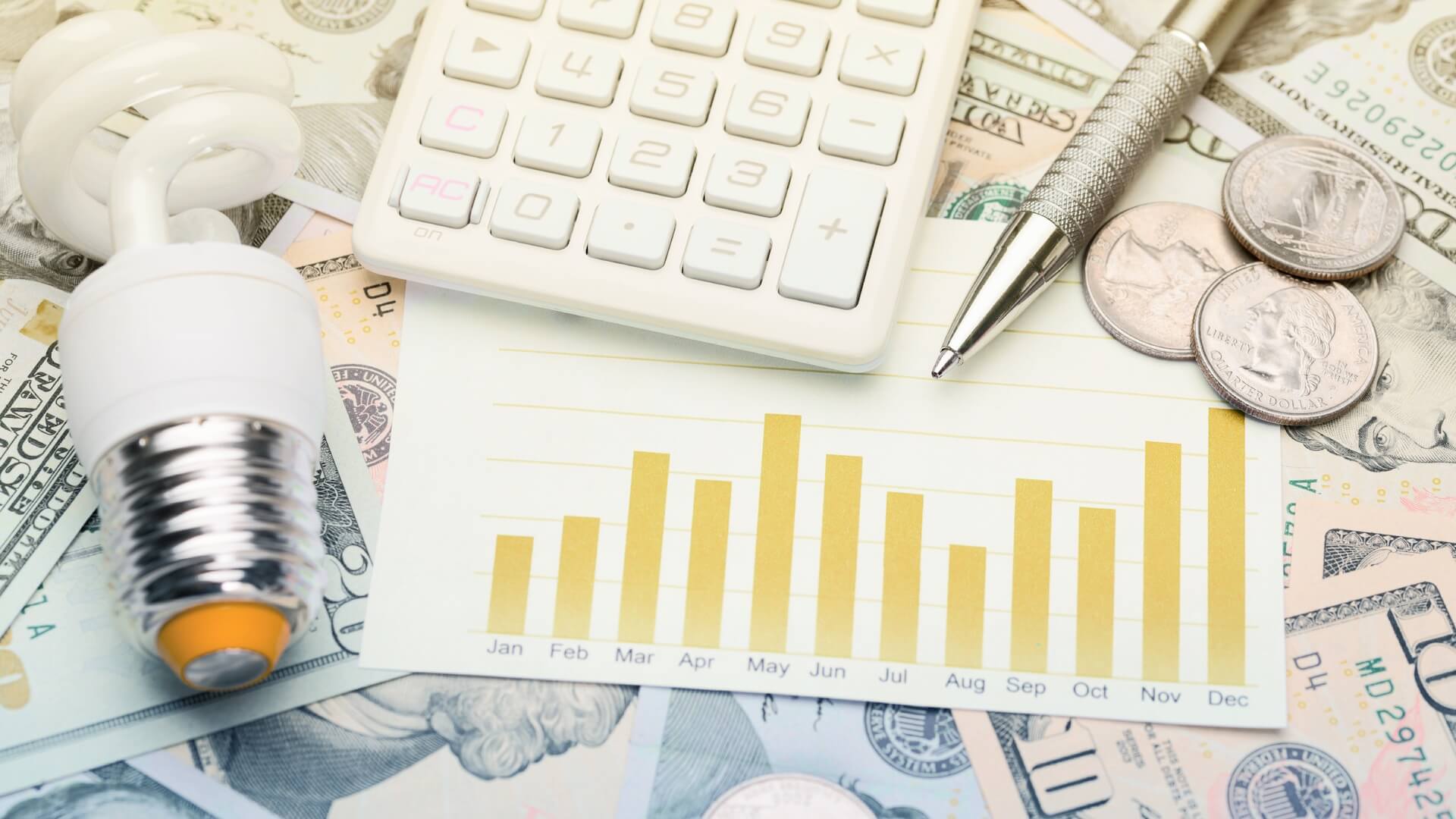 Where To Save on Your Electric Bill

Right now, it seems like everything has gotten more expensive. Inflation is a problem across the country, and housing costs are up as well. With grocery prices still at a high point, are people feeling the same sting when it comes to utilities and, more specifically, their electric bill?

To find out, we collected data from the U.S. Energy Information Administration about electricity consumption and costs for both residential and commercial sectors. We also surveyed Americans to see how they’ve been affected by increases. Which states have the highest monthly electric bills, and where have the biggest increases happened? Read on to find out.

In the first part of our study, we looked at which states had the highest monthly electric bills and which had the largest jumps in cost over one year. Where do things stand currently? 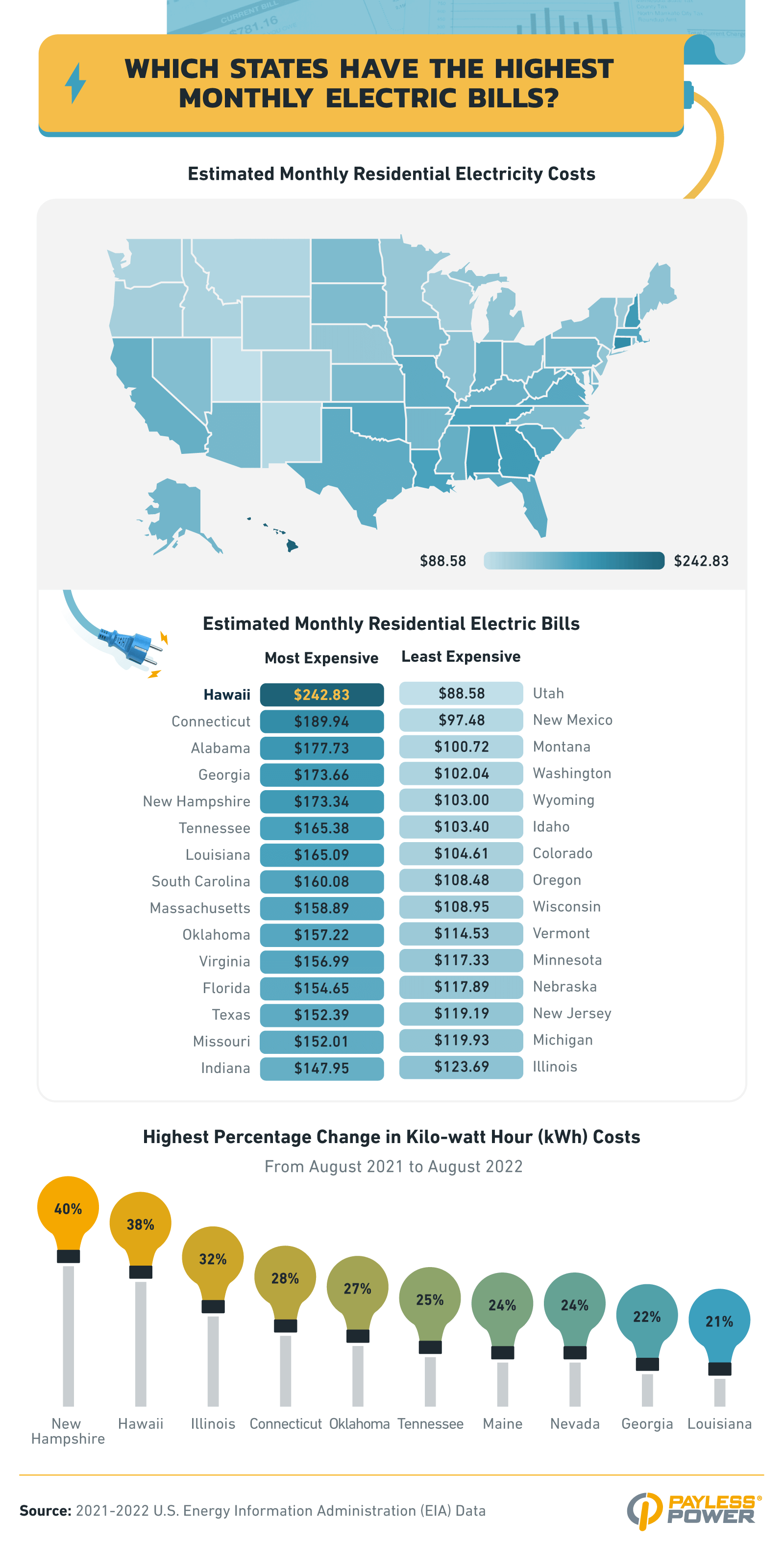 But the biggest increase happened in New Hampshire, which saw a staggering 40% increase in monthly cost between August 2021 and August 2022 (in cents per kilowatt-hour). Hawaii saw a 38% increase, which may be less surprising given that this island state has a significantly high cost of living. Of the top ten states with the highest increases, Louisiana had the lowest percentage increase in monthly electricity costs at just 20%. The state with the smallest price hike was Montana, which registered just a 0.7% increase.

Dealing With the Expense

As we’ve seen, electricity costs are high across the country, and some states are seeing particularly eye-opening increases. Next, we’ll look at how people have been handling it. 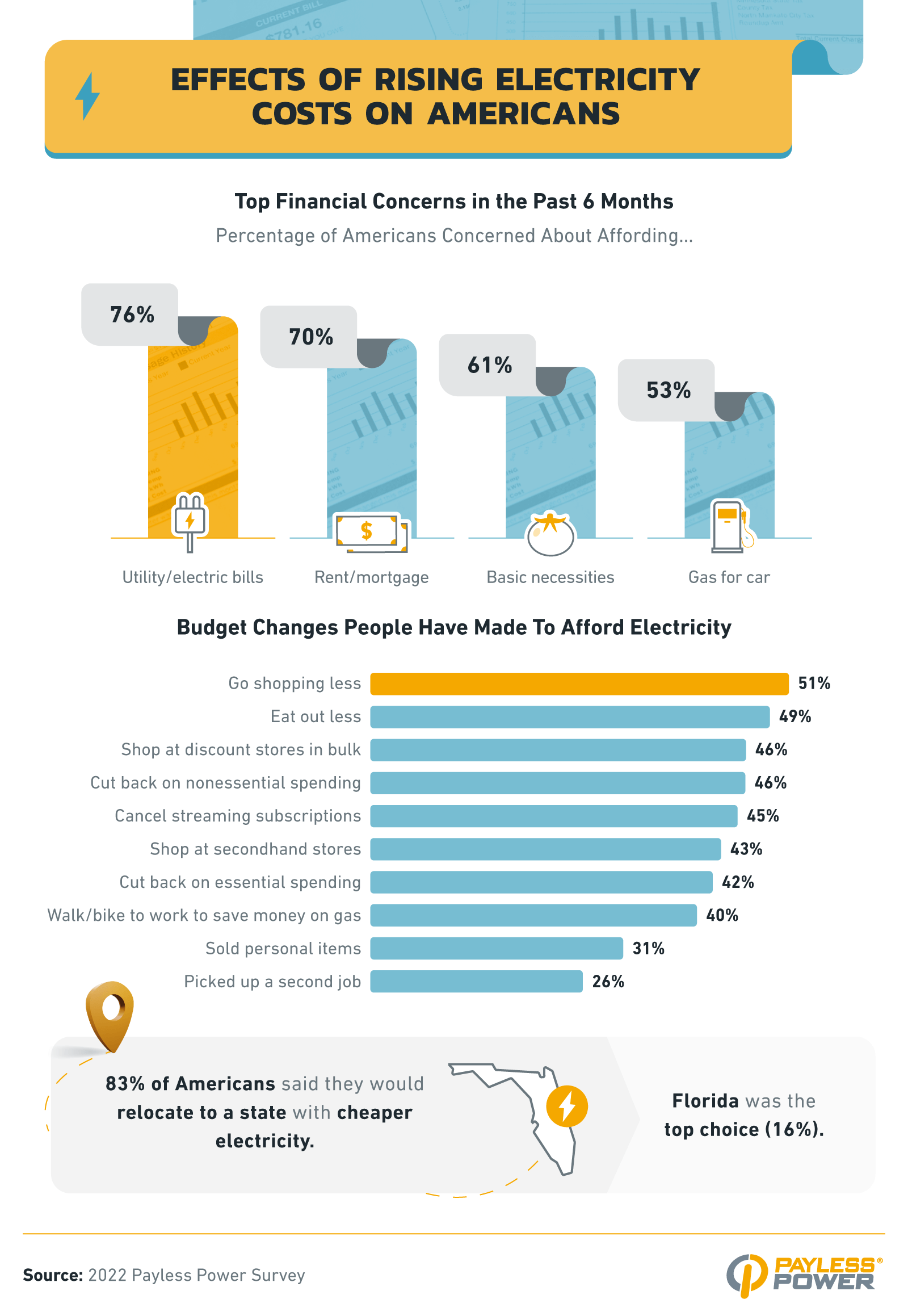 Many Americans are struggling financially, and all signs point to more challenging times ahead. But the greatest financial concerns among our survey respondents were being unable to pay their utility or electric bills (76%) and their rent or mortgage payments (70%). Understandably, they’ve made lifestyle shifts to afford these things. Cutting back on shopping was the top change they made (51%), and the second was eating out less (49%). Most people even said they’d relocate to a state with cheaper electricity (83%).

Of course, it’s not just homeowners and renters that are feeling the heat from increased electricity costs. Businesses are also struggling, and many have had to cut overhead and resort to other measures to reduce expenses. In the next part of our study, we analyzed electricity costs for commercial properties and asked business owners how they’re saving money on energy costs.

Aloha Hawaii! It was again the state with the highest monthly electricity cost for commercial entities, with the average bill totaling $1,654.89. This high price to keep the lights on is likely due to Hawaii also having the highest cost per kilowatt-hour and the largest increase in commercial electric costs from August 2021 to August 2022 (+38%). Given the state’s high cost of living, running a business on the islands is undoubtedly a financial challenge.

California came in second for the highest average monthly bill for commercial electricity ($1,274.33) and cost per kWh (25 cents). So, what are business owners doing to deal with these increased expenses? 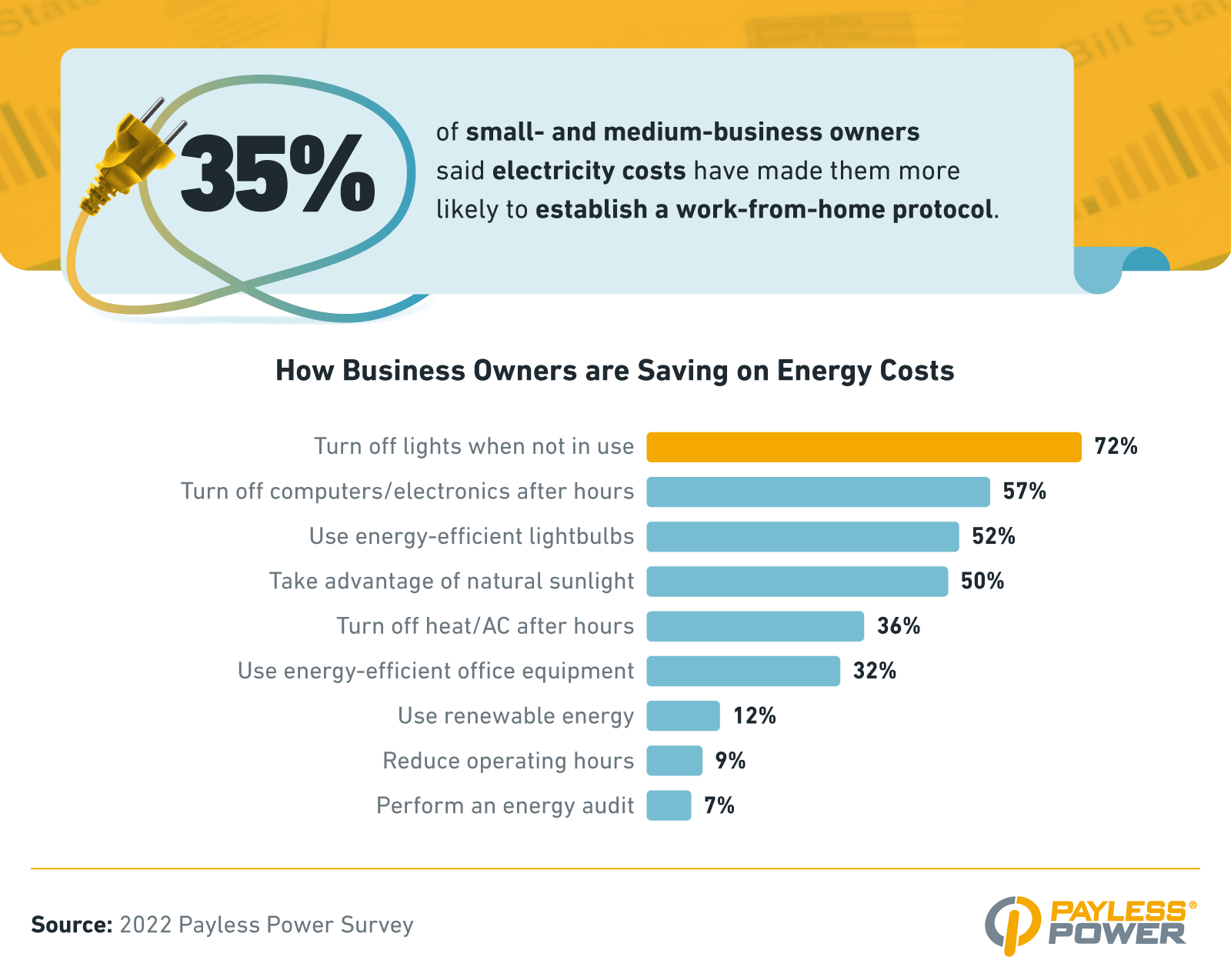 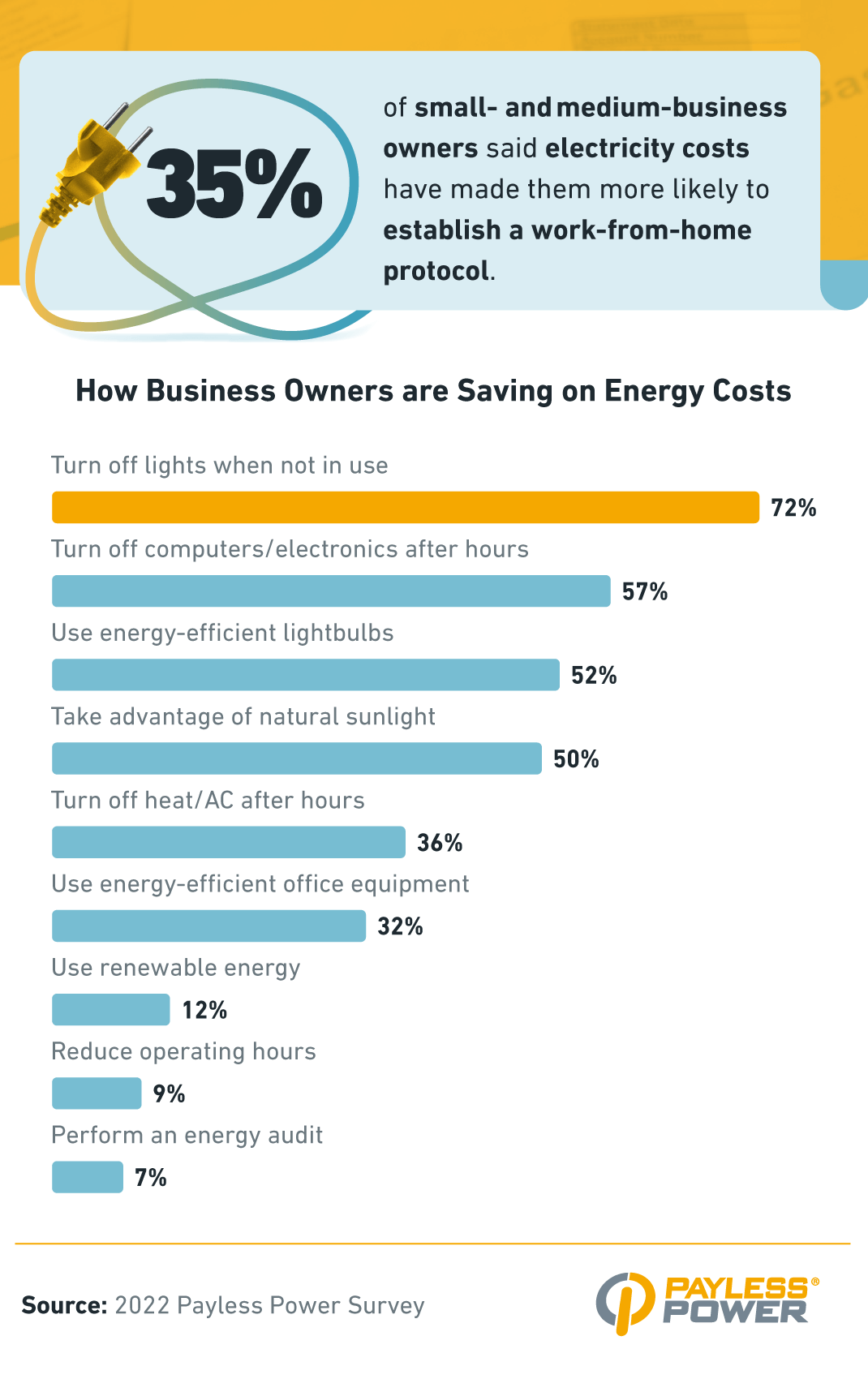 The majority of business owners (72%) said they turn off lights when not in use to lower their energy bills. Over half said they either turn off computers and electronics after hours (57%) or use energy-efficient lightbulbs (52%) to counter energy cost increases.

The high cost of electricity has also prompted 35% of small- and medium-business owners to enact a work-from-home policy for themselves and their employees. This can not only help decrease energy use at a business location but also reduce costs and time spent by employees during their commute to work.

Countering the Cost of Power

Americans across the nation are feeling the sting of expensive energy bills. Hawaii residents have it especially rough lately, as do the business owners there. Turning off electronics when they’re not being used and or switching to energy-efficient can help individuals and businesses and individuals lower these costs. But businesses, in particular, might consider establishing a work-from-home policy as well, if they haven’t already, to cut costs even further.

If you enjoyed our study, you’re more than welcome to share it for any noncommercial purposes. We only ask that you link back to these findings in doing so.