Texas Energy Gives You the Power to Choose 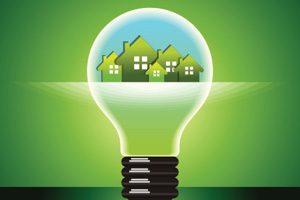 What is Power to Choose

In the year 2002, the state of Texas passed legislation which granted the majority of residents the ability to select an energy provider from the companies that service the state. In making this move, lawmakers have given texans the power to choose, but capability and understanding are two different things. In order to bridge the gap between simply comprehending and taking action, the Power to Choose was created as a resource.  Power to Choose is the state of Texas’ official electric choice website. It is operated by the Texas Public Utility Commission and is the site most commonly listed within the state’s local county and township pages as a tool for finding an electricity provider. The site is a resource meant to enable Texas residents to find and compare electric plans on an unbiased platform to allow them to pick the one that works best for them.

For Texas energy suppliers, the power to choose is a valuable tool for tapping into a large number of individuals looking for an energy provider. The process of getting listed on the site is free and lets companies list off their various plans along with their corresponding price tag. As an idea, it’s an important resource for consumers, providing insights that enable the most cost-efficient decisions to be made.

Unfortunately, in actuality, the site falls short of its intended purpose for a number of reasons.

Benefits of the Power to Choose

For Texas energy suppliers, the power to choose is a valuable tool for tapping into a large number of individuals looking for an energy provider. The process of getting listed on the site is free and lets companies publish their various plans along with their corresponding price tag. It is even more advantageous for consumers who may be searching for a new energy provider. As a one-stop-shop for energy, it allows individuals to educate themselves on the various companies, rates, and plans within an area and use what they learn to receive quality service for the best prices. Even more advantageous is the fact that deregulation stimulates competition among energy providers. Because of this, better rates and plans are offered to consumers in order to prompt them to sign up. As an idea, it’s an important resource for consumers that provides valuable insights that enable the most cost-efficient decisions to be made. Unfortunately, in actuality, the site falls short of its intended purpose for a number of reasons.

Shortcomings of the Power to Choose

Power to Choose and Electricity Today

Currently, the Texas Public Utility Commission(PUC) is beginning to get involved with the Power to Choose in order to improve the overall transparency of the site. This is not the first time that the PUC has mounted efforts to improve the database, as the commission intervened in the past to prevent energy companies from advertising offerings that would allow them to be featured in spots with higher visibility. Over time there has been an increase in complaints and recent findings suggest that listed prices are “accurate” insofar as the people who sign up for plans maintain a very specific usage threshold. Actual usage behavior is quite different from that which corresponds with the pricing however, and due to this fact, it is much more likely that consumers would incur a higher price than listed plans advertise. Overall, the PUC found that many share in the belief that the Power to Choose does not need to be eliminated, but there is an urgent need to overhaul it.

Misleading Formatting on The Power To Choose

Plastered all over the interface of the website are prices and plans offered by providers. At first glance, these deals appear second to none, drawing in consumers and earning clicks and sign ups, but in reality, they are not always what they seem. 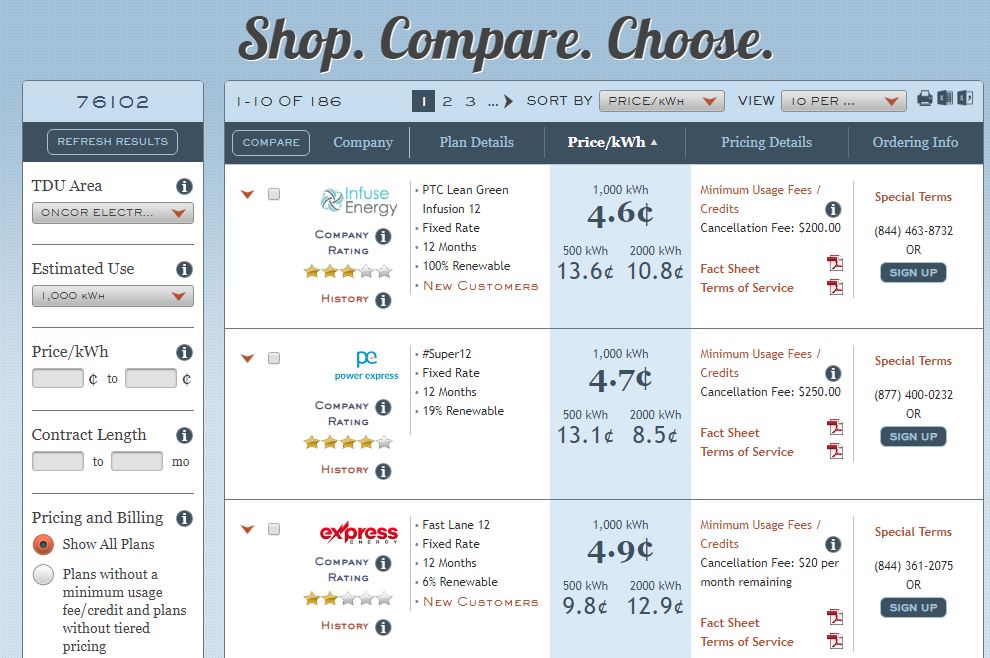 The first problem with the Power to Choose is its lack of transparency and use of misleading formatting when promoting plans. Within the site’s interface, data is organized in such a way that the “cheapest” options are put at the top with the same bits of information shown as metrics for consumers to compare plans. Given this format, it is far too easy for site visitors to get taken in by displayed rates, giving a false sense of each plan’s offering and prompting consumers to make purchases in haste. Additionally, Power to Choose has come under scrutiny for its tiered plans. These work by offering consumers a low rate at one particular usage level, and a much higher rate after using just a bit more. As an example, in the event the limit of one tiered plan is 1000 kWh of energy consumption, you may only have to pay a flat fee of $40. Increase your usage by a single kilowatt-hour to 1001 kWh however, and that cost could triple.

As a result, people often fail to understand the full implications of the coverage they are opting into when they use the Power to Choose.

Commonly withheld from the website listings are undisclosed fees, minimum energy usage requirements, and other charges. At one point in time, companies on the site were able to promote false one cent-per-kWh rates, which based on formatting would appear at the very top of the results pages.

The problem with this plan and other low-rate ones like it is that they fail to mention the additional charges factored in at the individual business level. This means that while providers are able to advertise what appear to be great rates, other fees are actually bundled in as well making that one cent-per-kWh charge four or five cents-per-kWh in reality. This has a multiplier effect, increasing the amount customers pay several times over.

That, coupled with small print and other unlisted costs, will give your bill an undesirable and unexplainable jump.

Are you using the Power to Choose to shop for an electric plan? Make sure you understand your service plan before signing up for energy.

The Power of Customers to Choose Energy

In the end, electricity should not be in the hands of energy providers but rather the customers. There is only one way to ensure that happens and that is by prompting consumers to do their own research and determine the total cost of their energy consumption for a range of usage quantities, fleeing from the commonly published notion of an average usage amount. Visiting the websites of various providers is one way to get some definitive answers, or if an individual is unable to find what they are looking for, calling the service companies and inquiring about the details of their plans will also help. Just as its name suggests, choosing should be a power and not a convoluted hinderance.

For more information on choosing the right energy plan or to find a provider that offers low rates, visit paylesspower.com. Offering cheap energy plans to suit both personal and business needs, Payless Power is a company committed to providing people not only with some of the best cheap electricity rates in Texas, but also with helpful customer service. Visit the website to learn more about how to save electricity at home, or connect with the online community on Facebook, Twitter, and Instagram.

In the end, electricity should not be in the hands of energy provider but rather the customers. There is only one way to ensure that happens and that is by prompting consumers to do their research and determine the total cost of their energy consumption for a range of usage quantities, fleeing from the commonly published notion of an average usage amount.