How Much Electricity do Christmas Lights Use 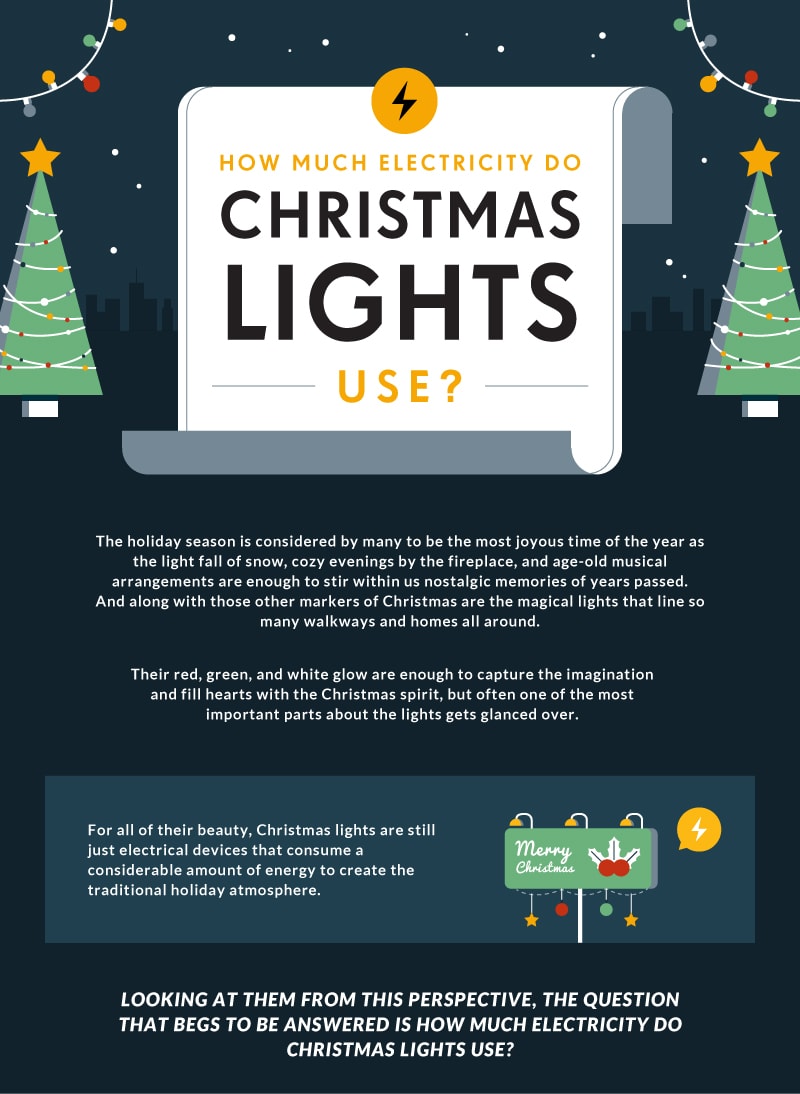 The holiday season is considered by many to be the most joyous time of the year as the light fall of snow, cozy evenings by the fireplace, and age-old musical arrangements are enough to stir within us nostalgic memories of years passed. And along with those other markers of Christmas are the magical lights that line so many walkways and homes all around.Their red, green, and white glow are enough to capture the imagination and fill hearts with the Christmas spirit, but often one of the most important parts about the lights gets glanced over. For all of their beauty, Christmas lights are still just electrical devices that consume a considerable amount of energy to create the traditional holiday atmosphere. Looking at them from this perspective, the question that begs to be answered is how much electricity do Christmas lights use? 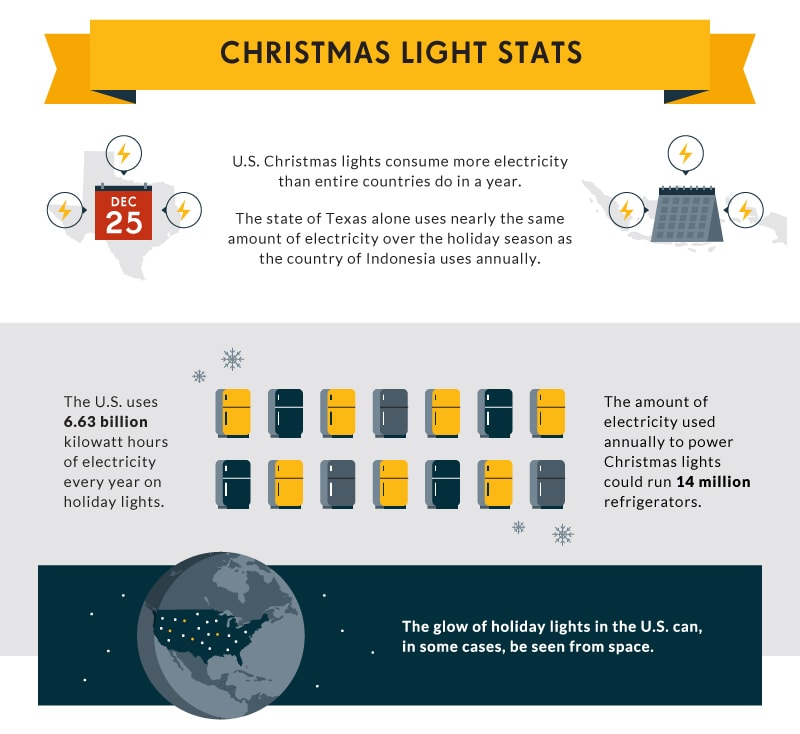 How To Calculate The Energy Cost Of Christmas Lights

While the amount of energy consumed during the holidays nationwide is high, the electricity used in individual homes may not follow that trend. There exist a number of methods to keep costs down, but recognizing that as a need requires individuals to first determine how much powering their lights is costing them. In calculating the expense of Christmas lights, several factors such as as home size, number of lights, and duration of illumination need to be taken into consideration before a dollar value can be assigned.

To begin determining the cost of your Christmas lights, you’ll first need to figure out the amount of watts used by your decorations. Once you have that information, you’ll have to convert the number of watts used into kilowatt-hours. To do this, divide the watts used by 1,000. After that, you will need to multiply the kilowatt-hours by the hours you leave the lights on each day, then by the number of days you leave the lights on during the month, then multiply that number by your monthly electricity rate. If you’re using several light strands that are the same size, you’ll only have to determine the cost of one initially, then you can multiply your final figure by the number of strands you use to get your final expense. 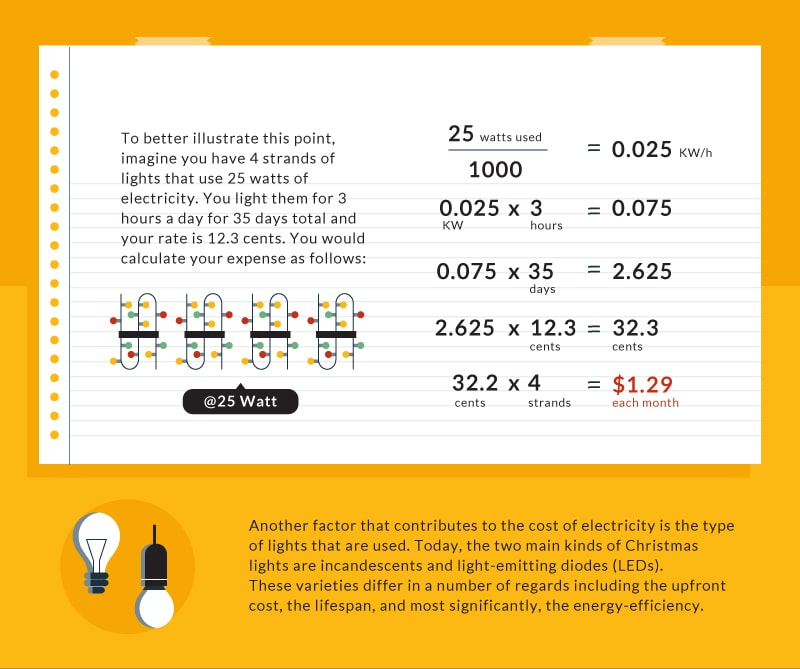 To better illustrate this point, imagine you have 4 strands of lights that use 25 watts of electricity. You light them for 3 hours a day for 35 days total and your rate is 12.3 cents. You would calculate your expense as follows:

Another factor that contributes to the cost of electricity is the type of lights that are used. Today, the two main kinds of Christmas lights are incandescents and light-emitting diodes(LEDs). These varieties differ in a number of regards including the upfront cost, the lifespan, and most significantly, the energy-efficiency. 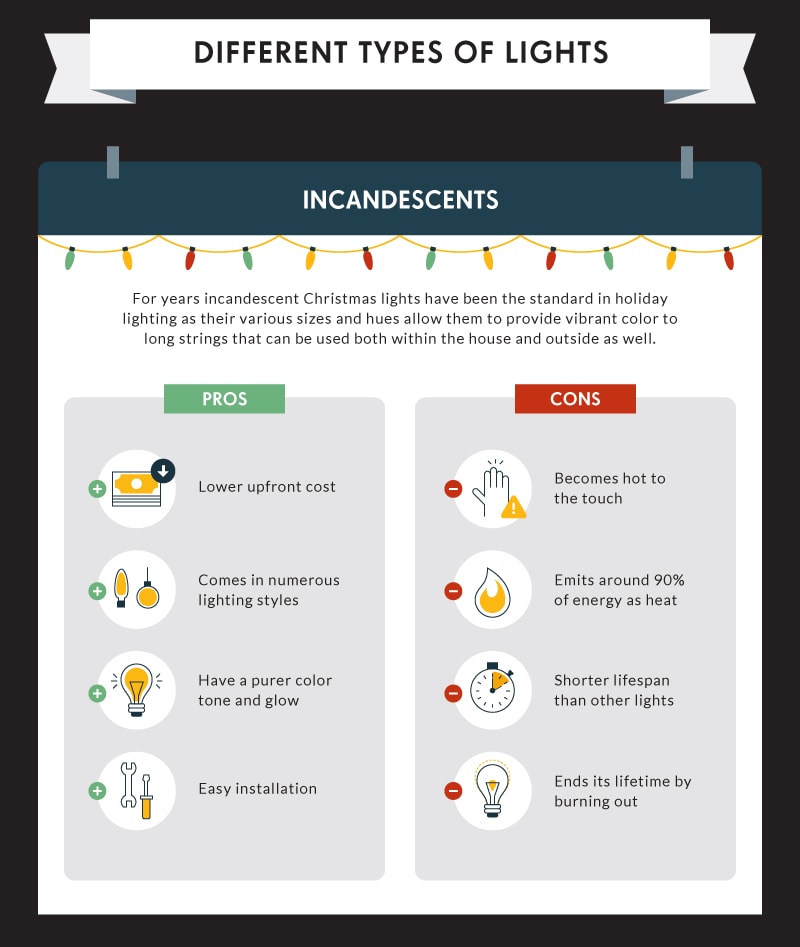 For years incandescent Christmas lights have been the standard in holiday lighting as their various sizes and hues allow them to provide vibrant color to long strings that can be used both within the house and outside as well. 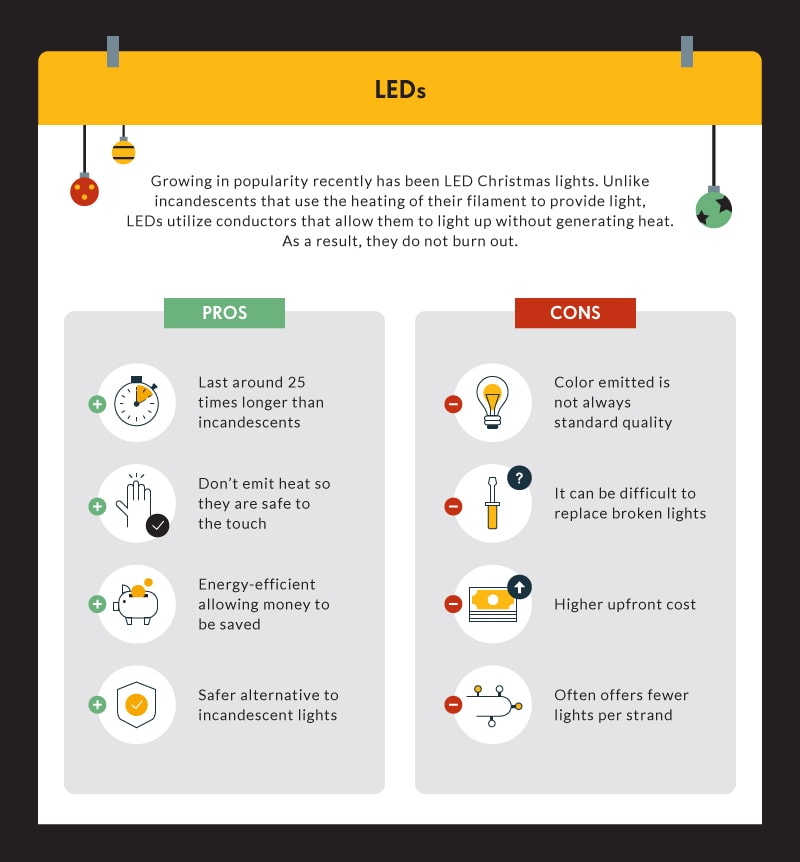 Growing in popularity recently has been LED Christmas lights. Unlike incandescents that use the heating of their filament to provide light, LEDs utilize conductors that allow them to light up without generating heat. As a result, they do not burn out.

Using Lights Around The House

The amount of electricity used to light a Christmas tree mainly varies based on its size and the type of lights used. The average recommendation is to utilize 100 lights for roughly each foot-and-a-half of tree, though trees may be decorated with more based on individual preference. Holding to the national average electricity rate of 12 cents per kilowatt-hour and the 40 watts of electricity used in a 100-light string of incandescent lights, the amount of energy needed to keep a tree on for 3 hours is as follows:

Often LED Christmas decorations have fewer lights on their string than incandescents. Assuming 70 lights that use 4.8 watts are placed along every one-and-a-half-feet of tree and that all other information is the same, the daily cost would be:

Even in the event that you were to use the same amount of LEDs as incandescents and compare their prices, the cost for operating LEDs would still be much lower and the amount of energy used would also be considerably less. 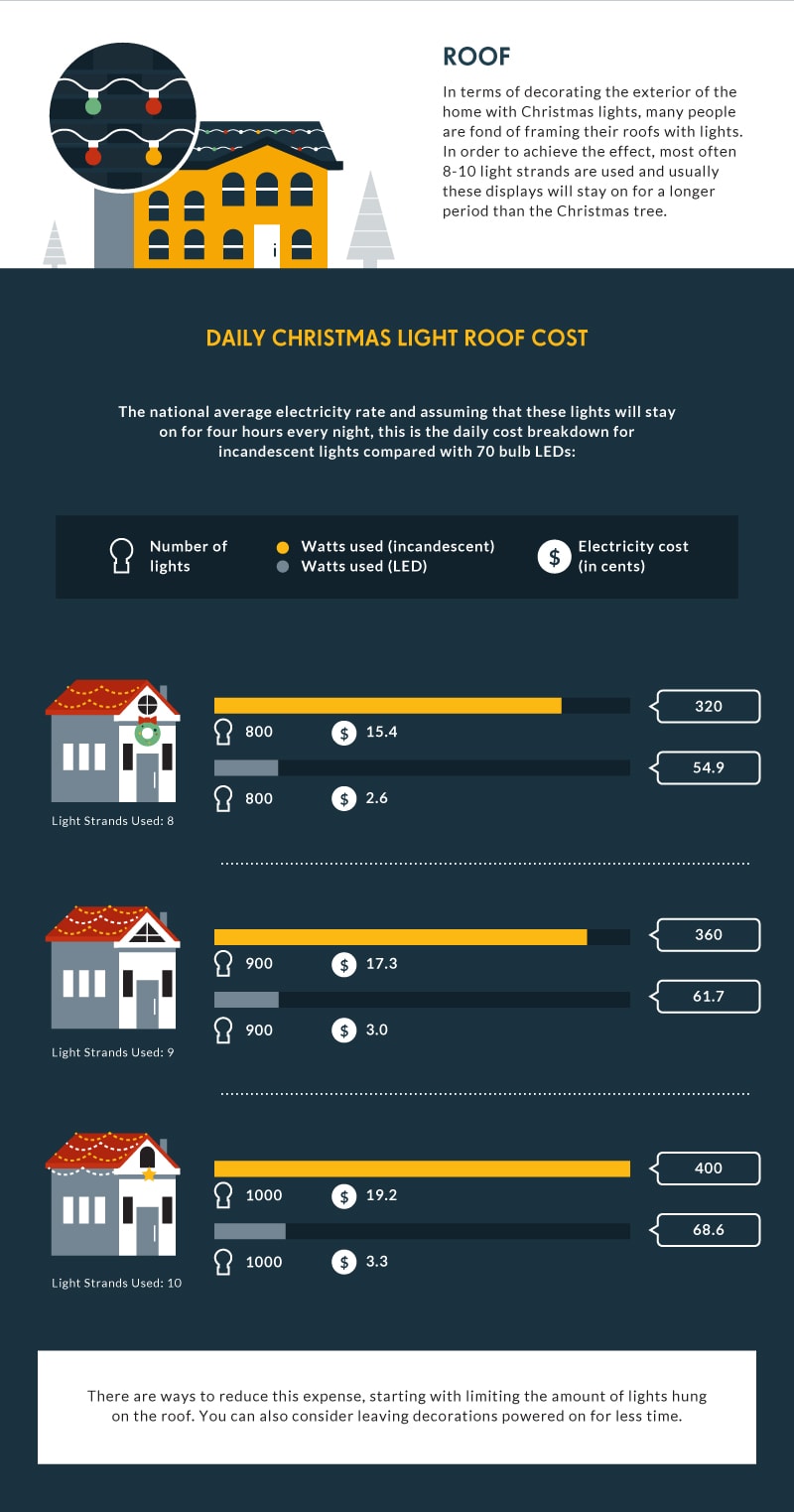 In terms of decorating the exterior of the home with Christmas lights, many people are fond of framing their roofs with lights. In order to achieve the effect, most often 8-10 light strands are used and usually these displays will stay on for a longer period than the Christmas tree. Using the national average electricity rate and assuming that these lights will stay on for four hours every night, this is the daily cost breakdown:

Once again, holding all information the same but changing the lights to the 70 bulb LEDs, the cost would be:

There are ways to reduce this expense, starting with limiting the amount of lights hung on the roof. You can also consider leaving decorations powered on for less time. 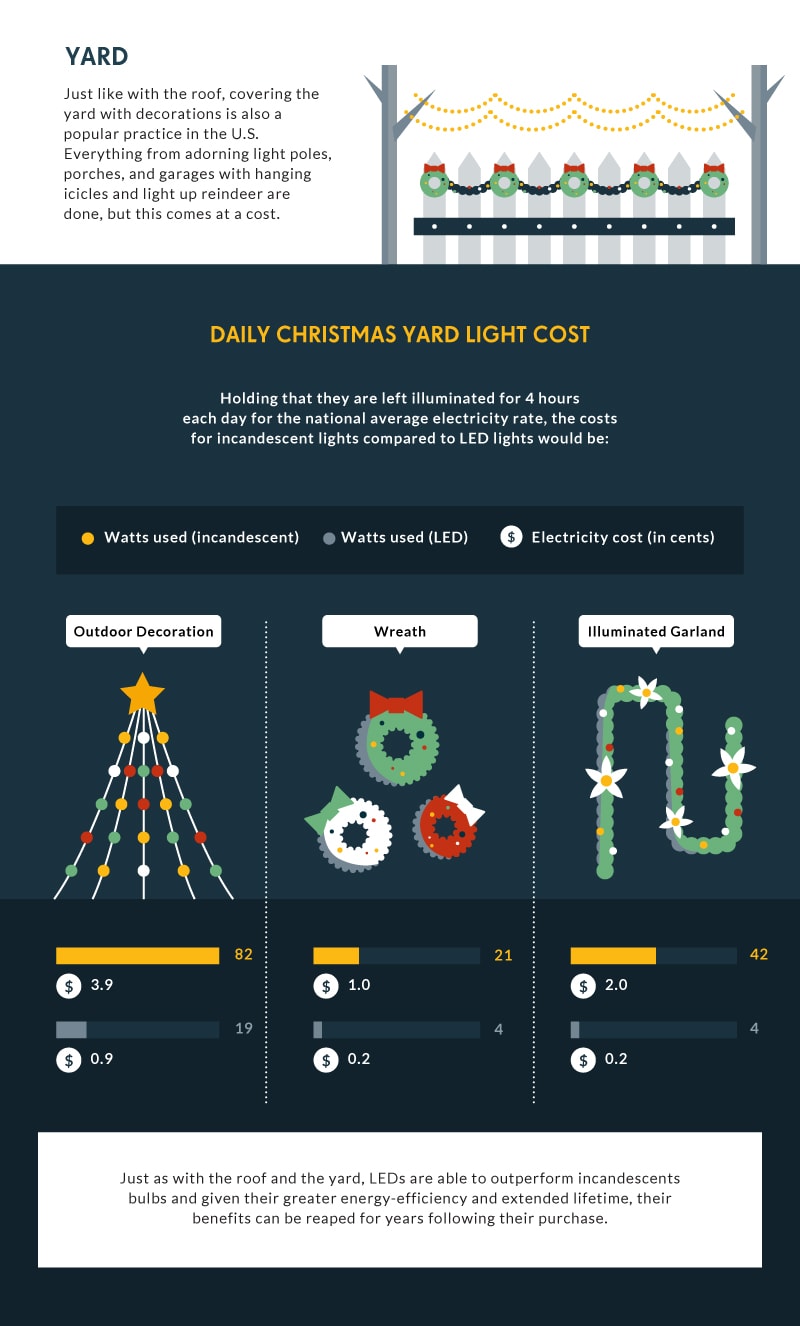 Just like with the roof, covering the yard with decorations is also a popular practice in the U.S. Everything from adorning light poles, porches, and garages with hanging icicles and light up reindeer are done, but this comes at a cost. Holding that they are left illuminated for 4 hours each day for the national average electricity rate, their costs would be:

Those same decorations come in LED varieties and require a considerably smaller amount of electricity, which also enables a lower cost:

Just as with the roof and the yard, LEDs are able to outperform incandescent bulbs and given their greater energy-efficiency and extended lifetime, their benefits can be reaped for years following their purchase.

So Incandescent Bulbs or LEDs?

Payless Power is a family-owned business, a quality that allows us to meet the needs of our customers with unprecedented success. No matter our customer’s credit history or income level, we strive to provide service to all. And whether you’re trying to reduce the amount of energy you use on your Christmas lights or simply find new ways to save on electricity, we offer a number of great plans that you can sign up for today.