How Far Are Political Parties Willing to Go to Save the Environment?

How Far Are People Going To Save the Environment?

Most people care about the environment to some extent. After all, we need an inhabitable planet, and there are many simple ways to contribute. But how far are people willing to go to save the Earth? What do their eco-friendly habits look like, and how might their political affiliation play a role in their perception of global warming and the environment? We surveyed over 1,000 people to find out.

Ways To Make a Difference

We started our study by asking participants how much they care about the environment and what they do about it in their daily lives. Let’s see what eco-friendly habits look like among those who care the most deeply.

There was a clear consensus among our respondents: 81% said they believe human beings are major contributors to global warming. That doesn’t necessarily mean they’re particularly invested in the issue, though: Just 55% said that they care significantly about the environment.

Among those who do care greatly, though, recycling is the top action they reported taking to do their part (69%). Using a reusable water bottle was the second most common action (60%), followed by turning off the lights while they’re not in use (50%) and keeping the water off while they’re brushing their teeth (48%).

It’s easy to assume that younger generations — the ones with more time left on this planet — care the most about the environment. But what does the data show? Who cares the most, and who’s doing the most about it?

Younger generations appeared to carry the most emotional weight due to environmental issues, with 46% of Gen Z saying they suffer from a great deal of eco-anxiety. The second youngest generation, millennials, were the next most likely to say the same (39%), followed by Gen X (29%) and baby boomers (27%).

But who is willing to sacrifice the most personal comfort to help save the environment? This turned out to reflect each generation’s anxiety level. Gen Z was the most willing to make these sacrifices (46%), while millennials were the second most willing, followed by Gen X and baby boomers. 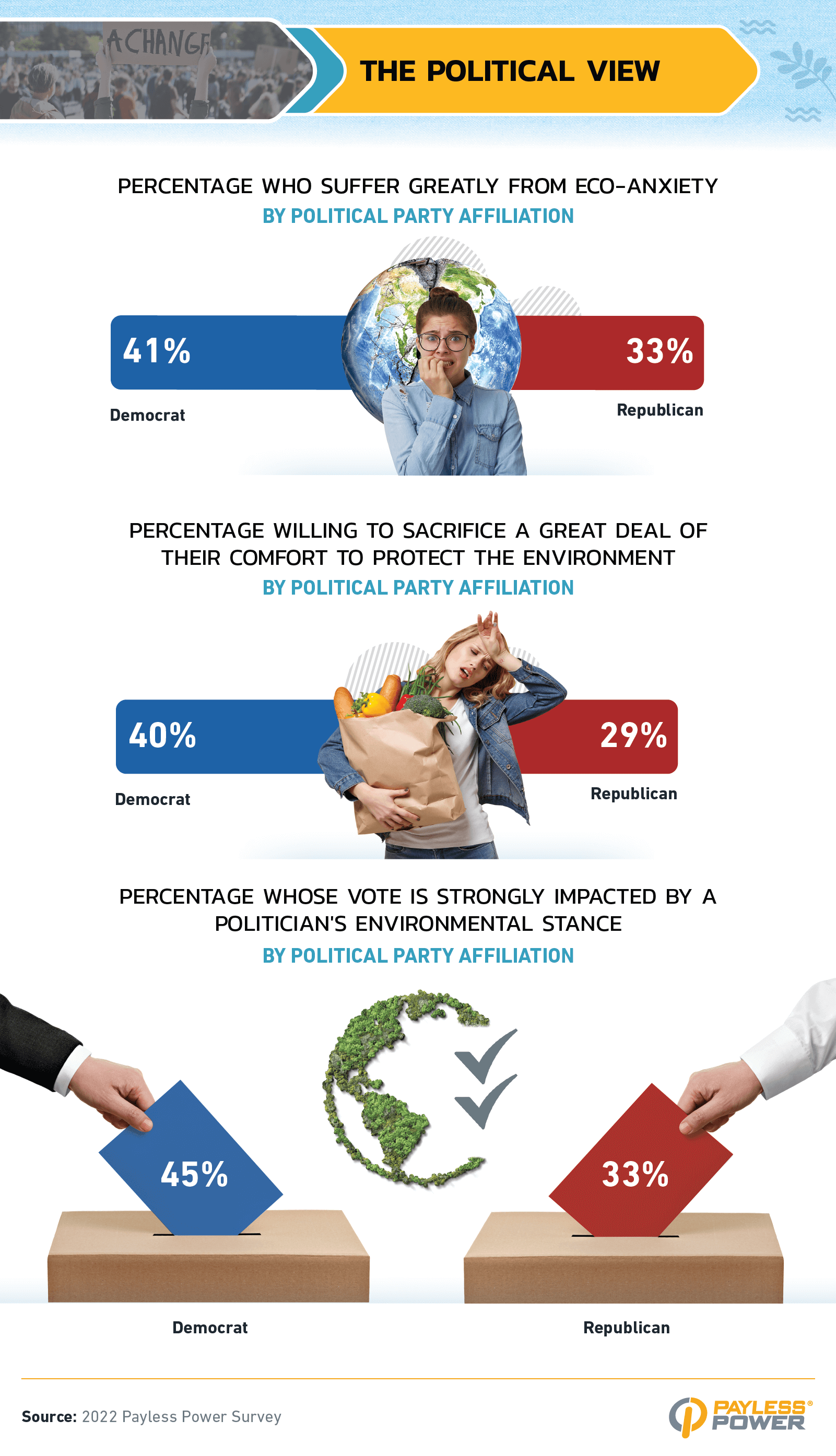 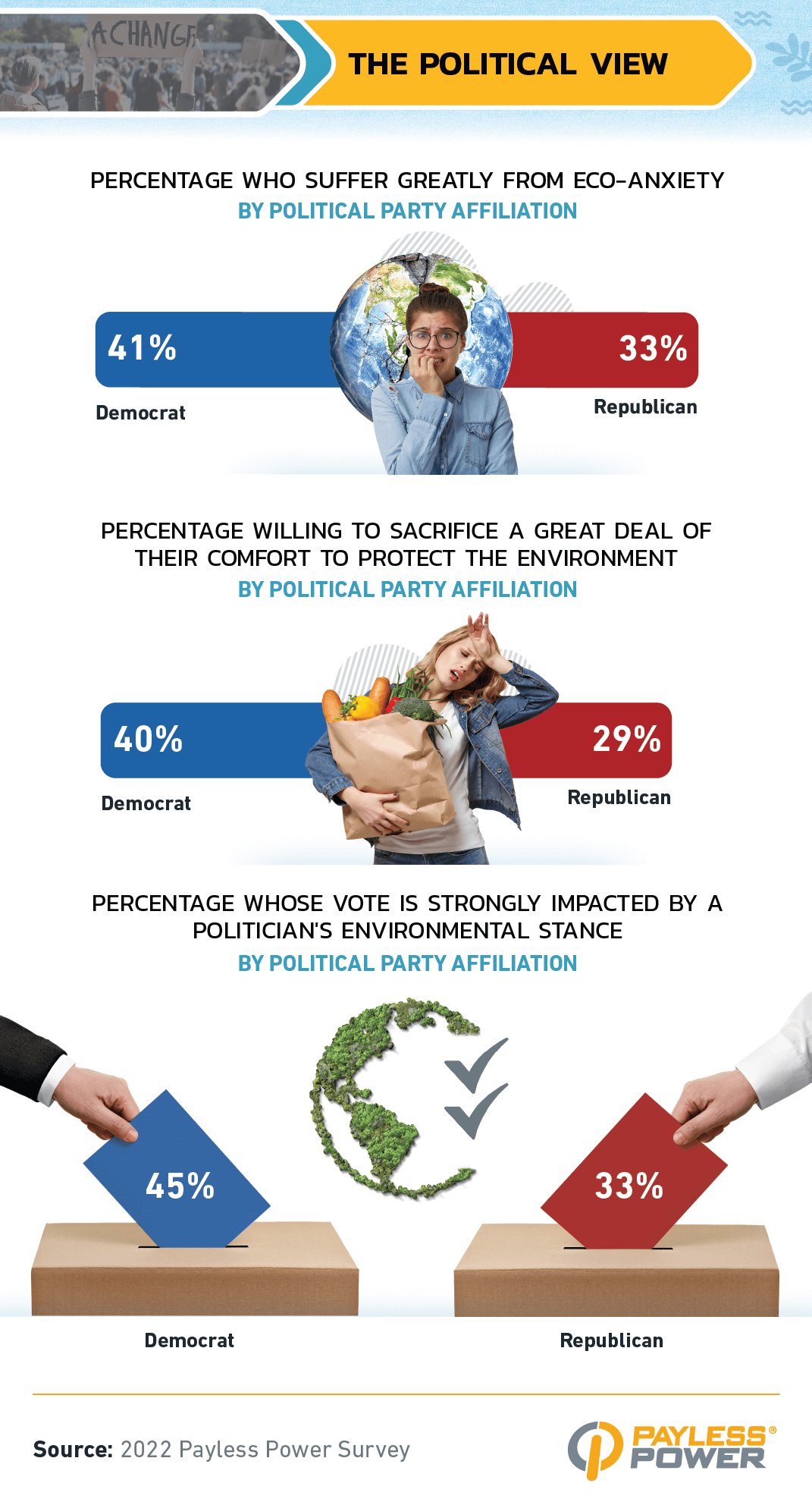 Democrats were more likely than any other political party to care about the planet and make changes to protect it. On the issue of eco-anxiety, 41% of people who said they greatly suffer from it were Democrats, while 33% were Republicans. Similarly, 40% of those willing to sacrifice much of their comfort to help save the environment were Democrats, compared to 29% of Republicans.

But do people’s political leanings impact their eco-anxiety, or is it the other way around? We asked whether a politician’s stance on the environment influenced our respondents’ voting decisions. Some of them said that it does — 45% of those who did were Democrats, while 33% were Republicans, echoing our findings about each party’s eco-anxiety and willingness to change their habits for the environment.

We found younger generations to be more invested in environmental issues, and political lines also separated respondents. Many people have adopted eco-friendly habits in response to these planetary concerns by recycling or reusing things and conserving energy, but these behaviors vary widely. Although only around half of people overall were especially concerned about climate change, the overwhelming majority agreed on one thing: Humanity is a primary cause of global warming.

Payless Power surveyed 1,004 people about their views on the environment. Of them, 13% were baby boomers, 24% were Gen Xers, 50% were millennials, and 13% were Gen Zers. As for political affiliations, 52% were Democrats, 30% were Republicans, 16% were independents, and 2% were non-affiliated.

If you enjoyed our study, you’re welcome to share it. We just ask that you link back to this page and that your purposes are noncommercial.