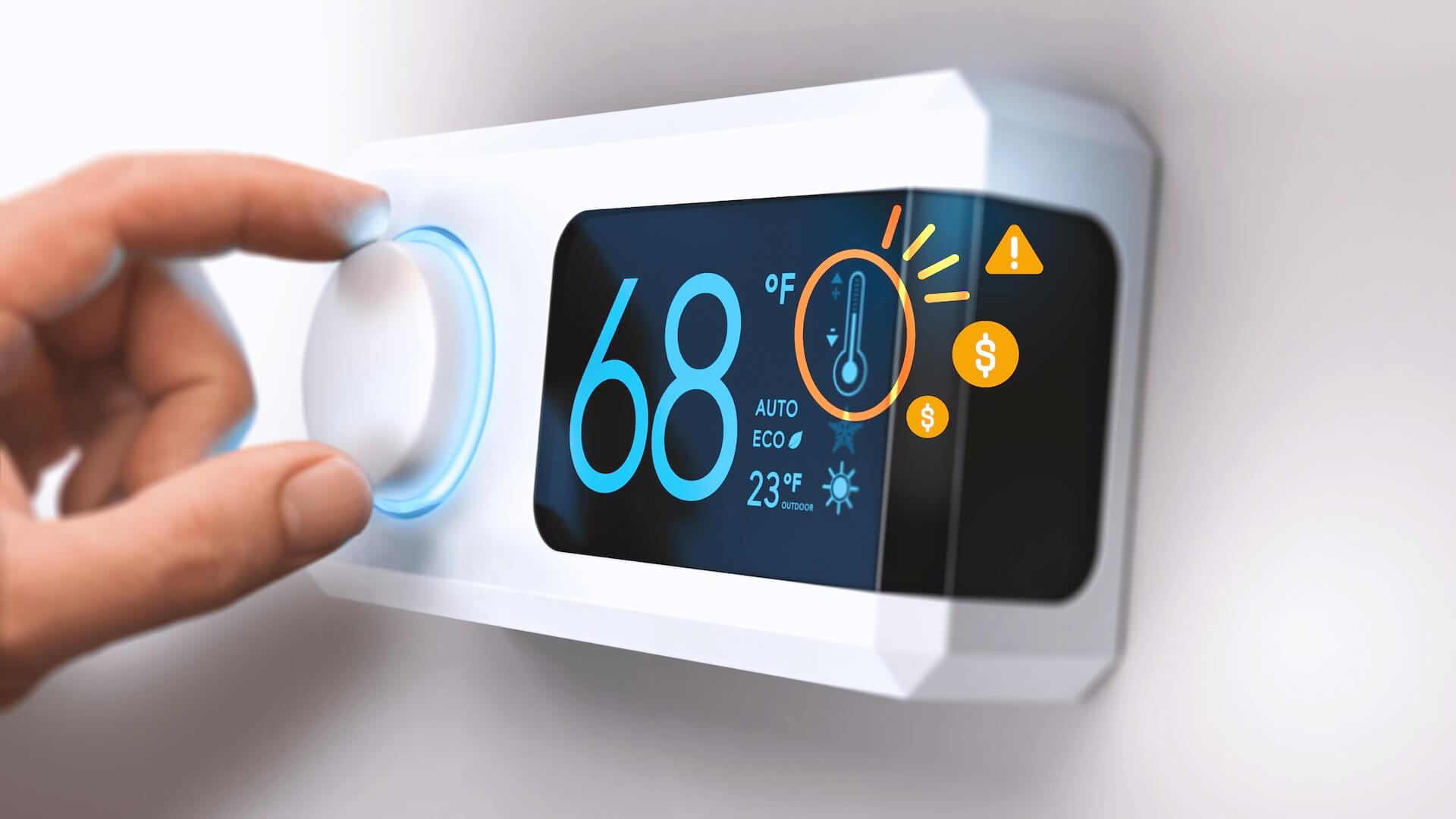 America and Europe Protest Russia by Reducing Energy Use

Russia is a heavy hitter in the world’s energy market, controlling up to 14% of it as of 2021. Now that they’ve invaded Ukraine and are actively engaged in war, the rest of the world watches in dismay. What can nearby Europeans do, or Americans from across the pond — especially amid soaring energy costs?

We studied the change in energy prices over the past year and since the war on Ukraine began to see how it’s impacted European and American budgets. We also surveyed 1,000 people from both continents about how they’re faring and what they’re doing in protest.

How is Russia’s war in Ukraine impacting energy prices across the continent, and what has that meant for residents’ bank accounts? We asked Europeans about their energy spending and anxieties about keeping their power on this winter.

Since Russia unleashed its war on Ukraine earlier this year, Europe has seen a jump in energy prices. As you might imagine, lower-income residents have felt the worst sting from these rising costs. More than half of those making under $25,000 (about 24,230 euros) per year told us they’ve already had trouble keeping their power on.

But regardless of income level, many people are concerned about power outages. Nearly half of the Europeans we surveyed were very to extremely afraid that they might lose power this winter (44%). A similar number (46%) expressed the same levels of fear that gas-based heating problems would prevent them from adequately heating their homes due to Russia’s invasion of Ukraine. Less than one-third said they have a plan in place should that happen.

With winter fast approaching, it’s understandable that people are worried about staying warm in the coming months. But according to climate models, Europe will not likely experience an especially severe winter this year. That’s great news for those turning down their thermostats to decrease their nations’ reliance on Russian gas supplies.

Meanwhile, other Europeans have had to adjust their budgets just to keep their homes comfortable (52%). Cutting nonessential spending was the top overall change made by 60% of those we surveyed, and nearly as many have made efforts to consume less power (56%). But some have had to reduce spending even on essential costs to make ends meet (17%).

The Influence on Americans

With energy costs skyrocketing in the U.S. as well, how have American budgets fared lately? And are they, too, pitching in to protest Russian energy? We asked them these things and also what they feared may come next.

Compared to their European counterparts, an even higher percentage of low-income Americans have struggled to pay their energy bills. Of the U.S. citizens we surveyed earning less than $25,000 per year, 70% have experienced this. That’s 32% more than Europeans living on similar incomes.

But widening the scope to Americans of all income levels shows a similar proportion of people who have endured this hardship: 67% of all American respondents have had trouble paying their bills due to rising energy costs over the past year. Now, many are concerned about what’s next. Only 2% had no fear of not being able to afford to heat their homes this winter. In fact, nearly half (45%) were very to extremely fearful of this happening.

The war has likely compounded these worries. After Russia invaded Ukraine, the average American energy bill increased by over $500 per year. This average annual increase was significantly higher in parts of the Northeast. Massachusetts residents saw theirs climb by $1,500, while New Hampshire’s costs increased by a massive $2,400. Now that temperatures in the U.S. have begun to drop, energy use will only increase, and so will the bills.

Still, many Americans (71%) are willing to keep their heating use to a minimum to stand against Russian energy in solidarity with Europe. Democrats were more willing than Republicans to keep their heat off altogether to protest Russia. Most Republicans would at least commit to lowering it (79%). Both sides must have agreed on one thing since 82% of Americans overall said they’re boycotting Russian products and businesses because of the war.

You’ve probably noticed higher energy bills this year. Why is that, and what might it mean for Americans during the cold winter months ahead? 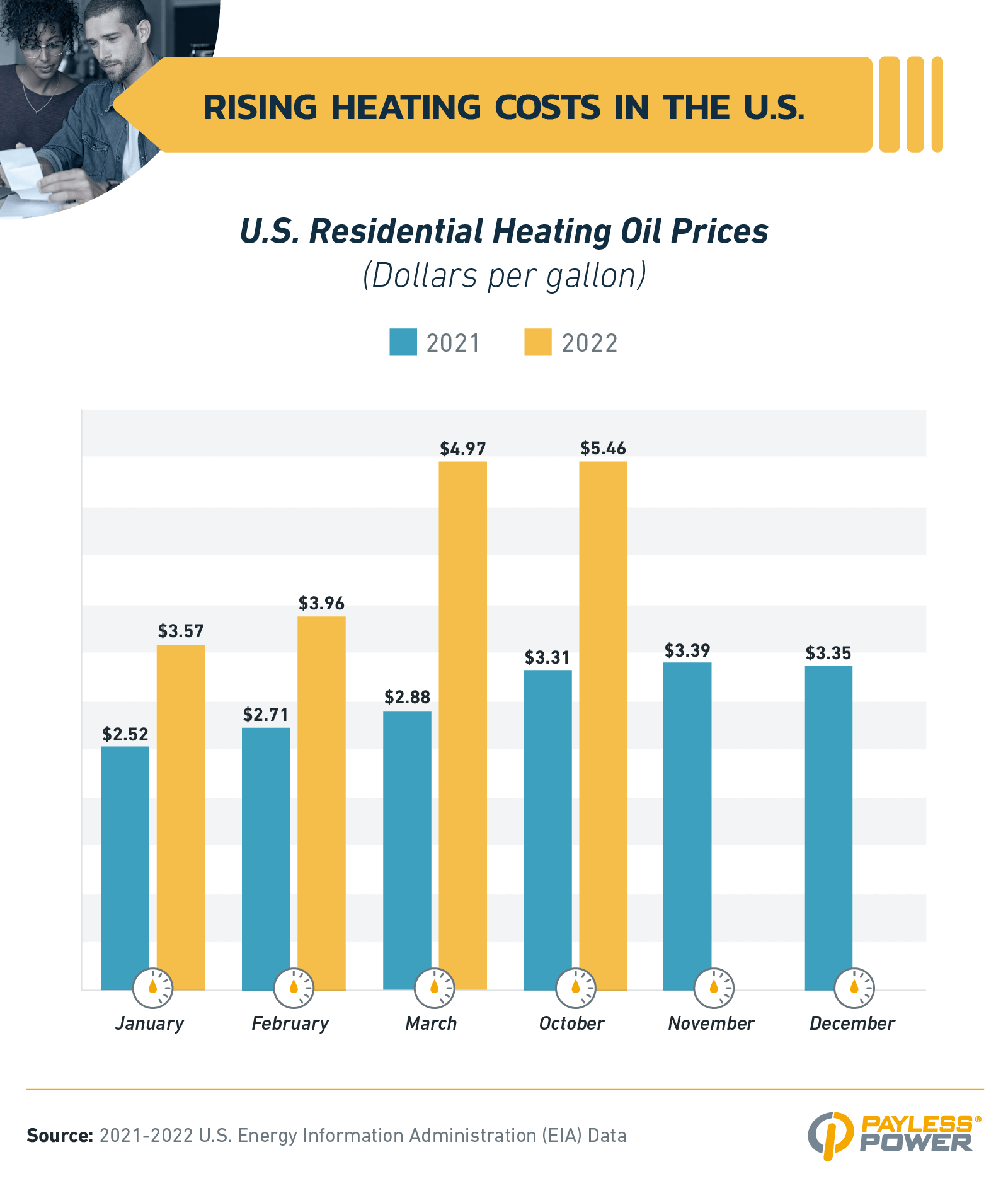 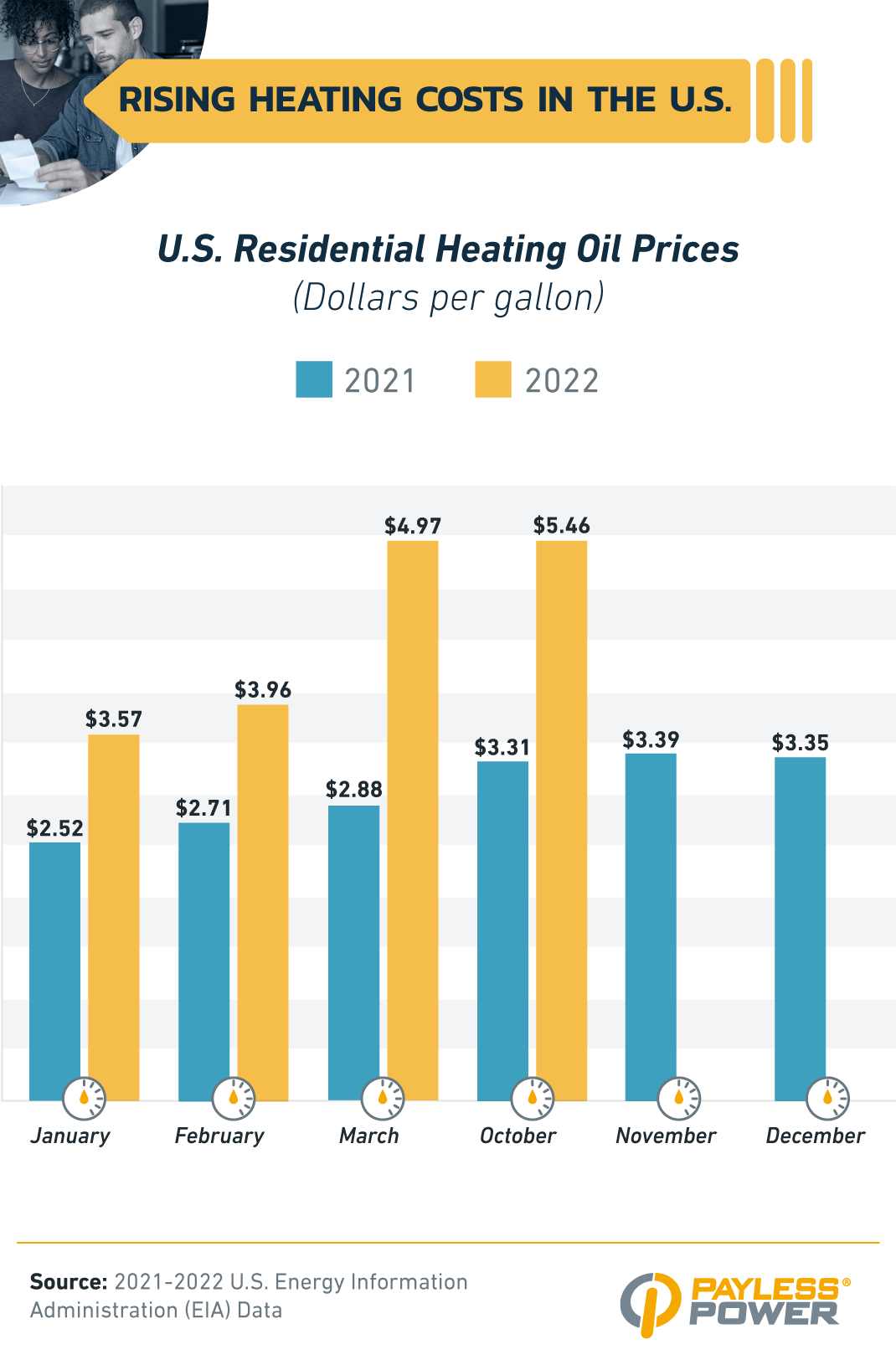 As gas prices continue to climb, heating oil prices will likely do the same, meaning an expensive winter for many Americans. There’s been a significant increase in the price of heating oil since last year, with the biggest spike happening this past spring. The cost climbed nearly 26% from February to March 2022, when Russia invaded Ukraine.

Soon after, the U.S. saw a 73% increase in heating oil costs compared to the same time last year, when citizens likely used roughly the same amount of energy to heat their homes in March. Fast forward to October 2022, and things haven’t improved. Heating oil costs were still just as high as they were in March, showing an increase of 65% from October 2021.

Russia’s war on Ukraine has had far-reaching impacts beyond Eastern Europe when it comes to the price of goods. Energy costs, in particular, have affected nearby residents of Europe as well as those in the U.S. The pressure has been especially hard on those with low incomes, many of whom already had trouble affording necessities.

With the cost of oil used to heat Americans’ homes spiking drastically in the months since the war started, the nation may be in for even higher energy costs through the coming winter. Even so, many Americans are willing to give up some level of comfort if it means protesting Russian energy.

Payless Power surveyed 480 Europeans and 520 Americans about the impacts of Russia invading Ukraine. Of the American respondents, 52% were Democrats, 34% were Republicans, and 14% were Independents or Green Party members. The average income was $59,441. For European respondents, the average income was $25,447. We obtained data on 2021-2022 residential heating oil prices from eia.gov in November 2022.

Even as energy prices climb, Payless Power has your back. We offer affordable electricity for everyone with flexible, deposit-free plans that fit your budget.

Interested in sharing our research with a friend or associate? We share our findings freely, only asking that you include a link to this page when you cite them.