Best and Worst Websites for the Environment

Finding the Worst Websites for the Planet

From Clicks to Carbon Dioxide

Websites have a carbon footprint, and it’s bigger than you might imagine. More complex websites use more energy to load pages, which impacts our environment. Websites and their energy sources vary, so some are likely worse offenders than others. But which of the most visited sites on the web affect our planet the most?

The Payless Power research team ranked over 50 popular websites from best to worst, covering multiple major industries. We based our rankings on numerous variables that affect the environment, such as the amount of CO2 produced by site visits and whether websites ran on sustainable energy. Keep reading to see how the internet’s most popular websites compare.

To find the best and worst websites for the environment, we analyzed five carbon footprint variables. Let’s find out which sites topped our list and dive deeper into how they earned their overall rankings.

To figure out how detrimental each site was to our environment, we created a “clean” ranking system based on five eco-friendliness aspects, including:

Clean energy sources (like wind and solar) don’t contribute to CO2 emissions, and they were a strong factor among the environmentally-friendly websites. Of the 20 best sites for the environment, 19 ran on sustainable energy. Google was the cleanest website of all, producing the least amount of CO2 per visit. However, it only came in second for the energy it produces. Twitter took the number one spot in that category with the least amount of energy produced.

As for the worst offender, GameSpot had the lowest overall score. Their website produced the most CO2 per visit and ranked second-to-last for the energy it produced per year. Unsurprisingly, it also didn’t run on sustainable energy. If you’re aiming for eco-friendly, GameSpot is an example of how not to run a website.

Next, we’ll look at which websites produced the most and least CO2 emissions and how each industry ranked as a whole. We found some surprising discrepancies. 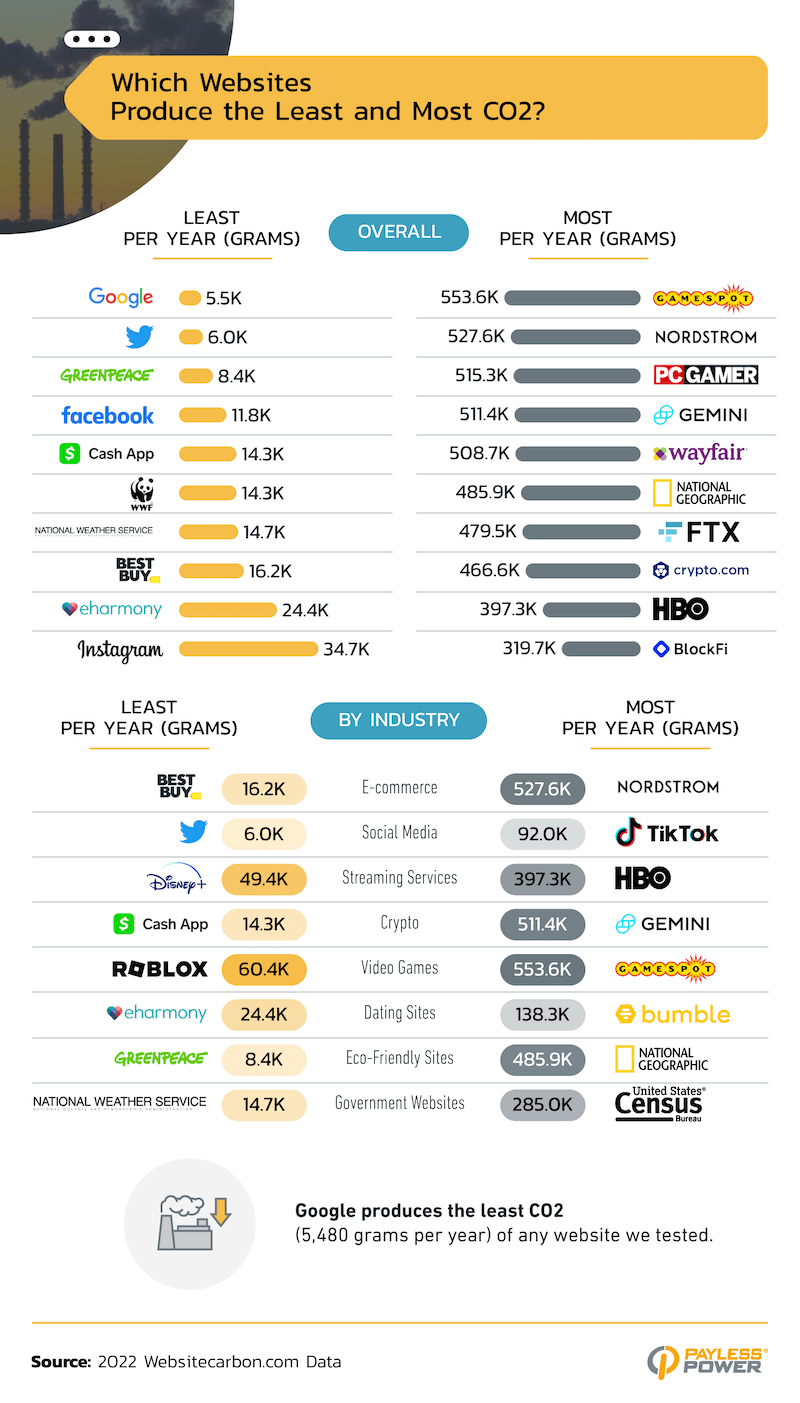 For CO2 emissions, Google earned its place at the top of our list with the least emissions of all: just 5,480 grams per year. GameSpot, meanwhile, was at the very bottom. Their site produced more than 550,000 grams of CO2 yearly. That’s almost ten times more than Roblox (60,000 grams per year), another popular gaming website. Maybe if more video game companies took cues from Roblox on how to run a website, they could make the video game industry more eco-friendly.

Another industry with notable environmental costs is e-commerce. When we pitted online shopping destinations against one another, Best Buy came out on top, producing a yearly CO2 amount of only around 16,000 grams. On the other hand, Nordstrom was the worst e-commerce performer regarding emissions and was only one spot away from being the biggest CO2 emitter of all the ranked websites.

Unfortunately, not all environmentally-focused sites practice what they preach. National Geographic showed their true colors with a whopping 485,940 grams of CO2 emitted each year, compared to the mere 8,440 grams produced by Greenpeace.

We also saw large gaps in emissions between social media platforms. Even though Twitter doesn’t use sustainable energy, it still managed to outrank TikTok, which created more than 15 times the carbon emissions of its greener counterpart. Streaming services showed smaller gaps, with Disney+ producing just under 50,000 grams of CO2 per year compared to HBO’s nearly 300,000 grams (about eight times more).

Can Nature Keep Up?

As we’ve seen, a simple click can affect the environment. But how? To put the data in perspective, we determined how many trees would be needed to offset the amount of carbon produced by each website over a year.

Trees are like the earth’s lungs, inhaling carbon and exhaling oxygen. But it would take 26 trees a whole year to counteract the carbon emitted by our study’s biggest environmental offender, the GameSpot website. The next worst sites didn’t fare much better. Wayfair, PC Gamer, Nordstrom, and Gemini were all tied with two dozen trees needed to offset their annual CO2 production.

We also explored the amount of energy websites were churning out; the less energy they produced, the better. Gemini produced the most energy at 1,188 kWh — enough to drive an electric car 4,724 miles! The other top eight energy-creating sites each generated over 1,000 kWh per year. The least energy producers were Twitter and Google, making only 13 and 14 kWh per year, respectively.

How They Stack Up

Now that we’ve looked into how websites affect the environment, let’s see how much dirtier each site is when compared to all the others we ranked. Did environmentally conscious companies and groups create cleaner websites? 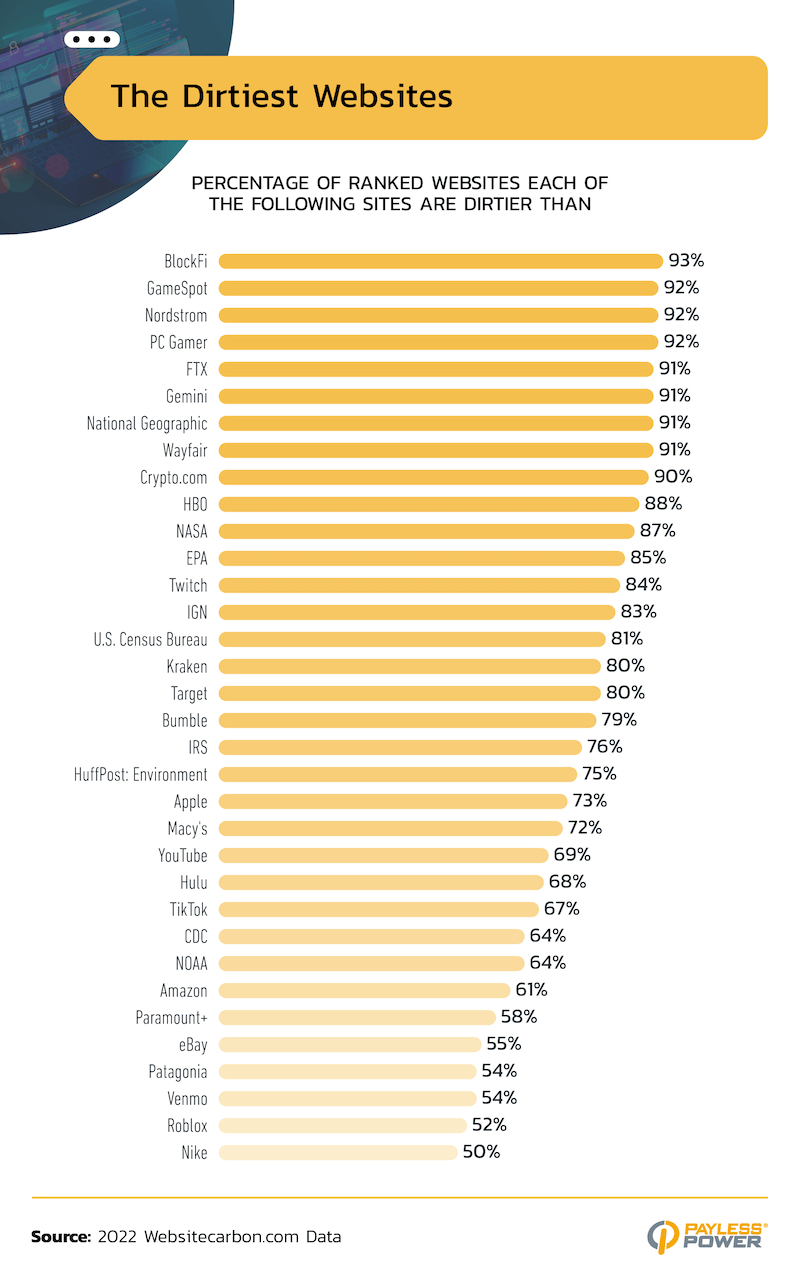 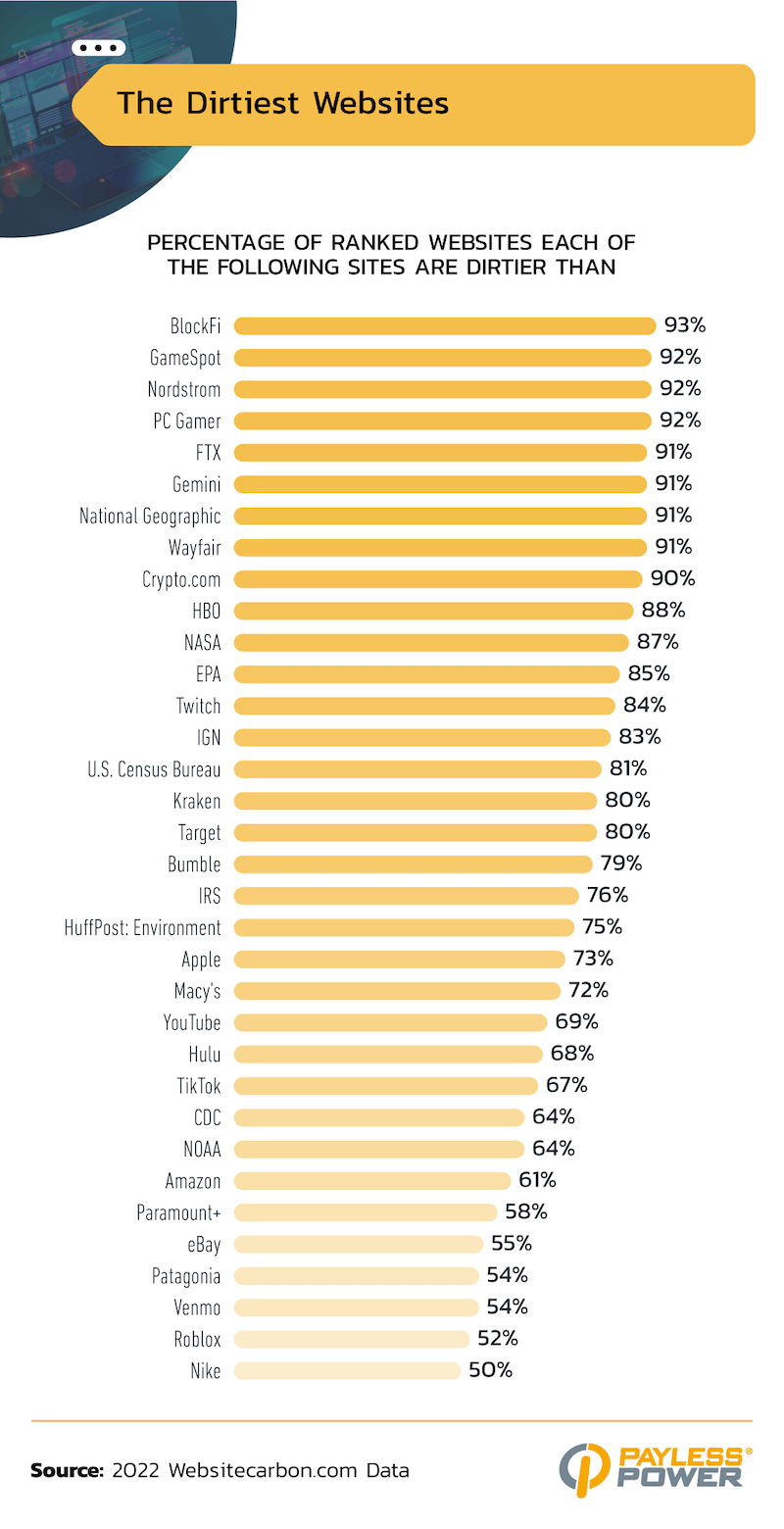 Many government sites were “dirtier” than most (meaning they had a larger carbon footprint). The Environmental Protection Agency (EPA) website was dirtier than 85% of all internet sites we tested, but NASA’s was the dirtiest government site of all (87%).

Perhaps less surprisingly, major e-commerce player Amazon was dirtier than 61% of other tested websites, and tech giant Apple was dirtier than 73%. But numerous companies you might expect to be eco-friendly tested even more poorly. National Geographic stood out above the rest, being dirtier than 91% of other sites. Patagonia, a very environmentally conscious company, was dirtier than 54% of websites. Clearly, you can’t always judge a book by its cover.

Knowing which websites cause the most negative environmental effects is only half the battle. These companies need to turn to sustainable energy and cleaner digital platforms to make a difference. Certain companies and organizations may be bigger culprits than others, but every website we tested had some impact — even if only a small one. Hopefully, this study helps online shoppers, social media scrollers, and crypto enthusiasts to be a little more wary about which sites they use. Maybe that will eventually lead these companies to make changes as well.

For the metascore, we compiled data from websitecarbon.com on the following variables:

Paylesspower.com is cleaner than 58% of websites tested.

Payless Power’s mission is to provide simple, affordable electricity for all.

See something you want to share? Show these findings to friends, colleagues, or anyone else for noncommercial purposes, but please also provide a link back to this page.