Bands With The Biggest Carbon Footprint 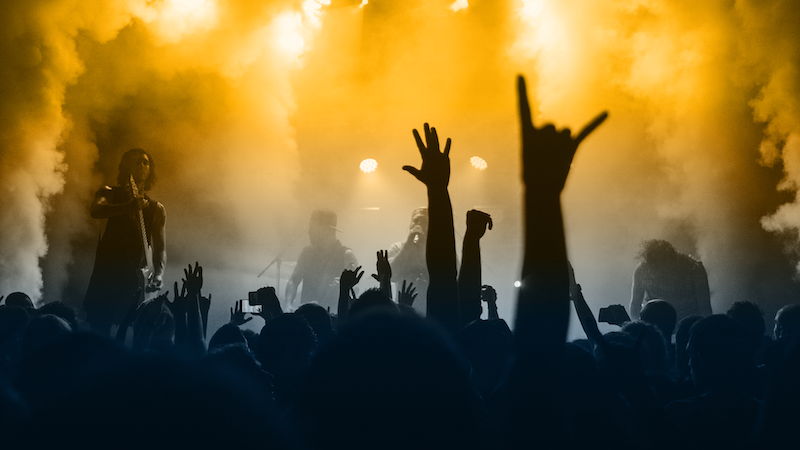 Battle of the Bands: 2022 Emissions Edition

There’s no better way to enjoy your favorite musician than watching them perform live on stage. Concert tours bring artists directly to their fans so they can experience the music like never before. But touring requires cross-country and international travel, including long flights and gas-guzzling tour buses. Which musicians manage their tours with a small carbon footprint, and which contribute to more than just noise pollution?

We used Billboard rankings to find the most popular touring musicians in six different genres. Then, we analyzed their 2022 tour dates to estimate their carbon emissions and determine which artists top the eco-friendly charts.

Each music genre had a unique sound and style. Some keep their melodies and carbon emissions low-key, while others turn the volume all the way up. 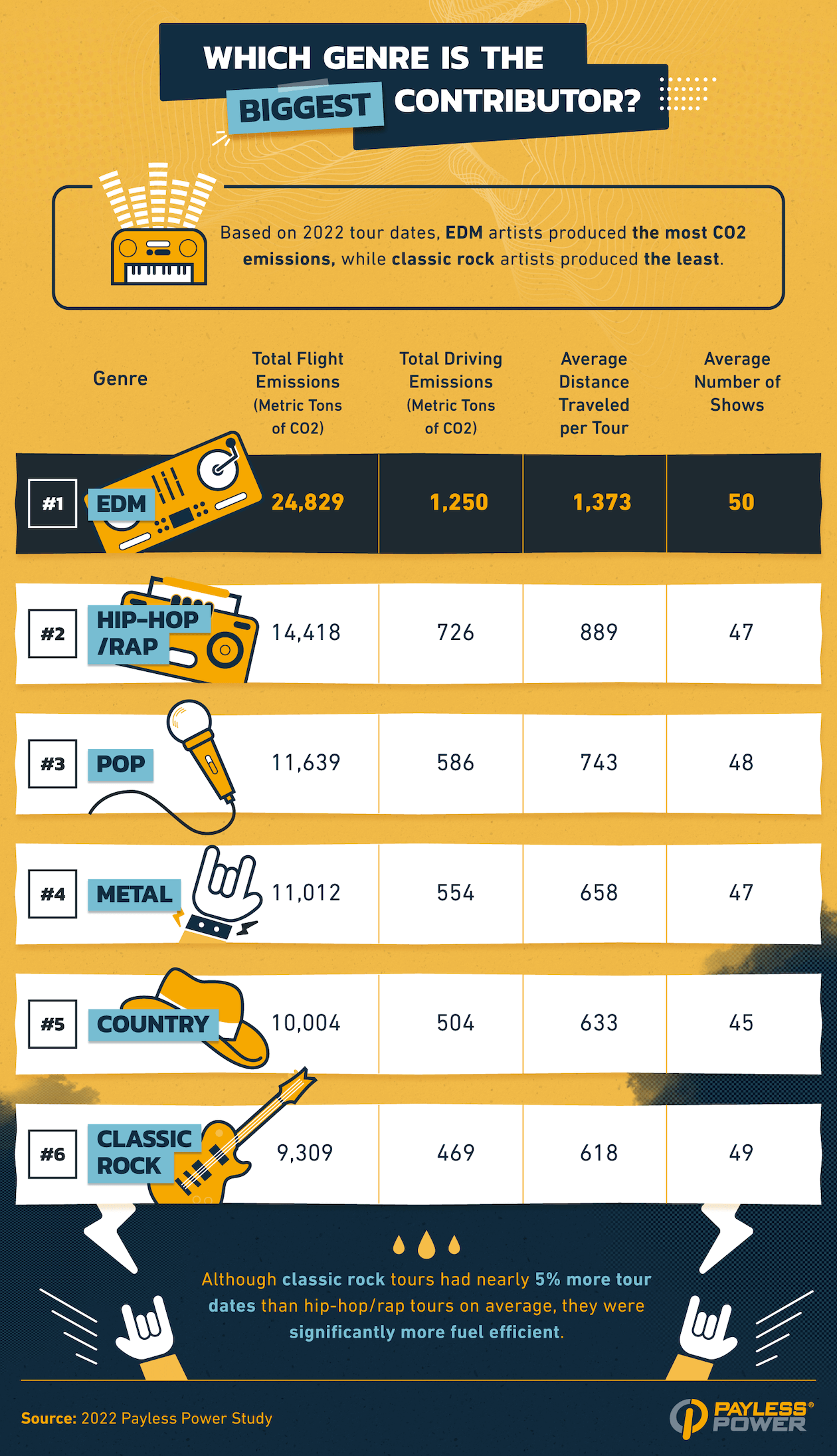 Exhaust from planes, buses, and other vehicles account for a large chunk of greenhouse gas emissions, including nitrogen oxide (a high concentration of which can cause respiratory problems). Greenhouse gases artificially warm the earth, quickening global warming and endangering life on the planet. The more fuel used for travel, the hotter the world gets — and concert tours involve a lot of travel.

Classic rock musicians had the most fuel-efficient tours and the lowest carbon emissions. These artists used the least fuel for flying and driving and traveled the shortest distance, despite having the second-highest average number of shows.

On the other hand, EDM tours used exponentially more fuel even though they averaged only one more show than classic rock tours. EDM tours used over 10,000 more metric tons of flight fuel than the next highest genre (hip-hop/rap) and traveled 54% more miles. In fact, the EDM tours we analyzed traveled a total of over 1 million miles. The second-highest traveling genre traveled almost 400,000 fewer miles, despite all genres having a similar number of shows. 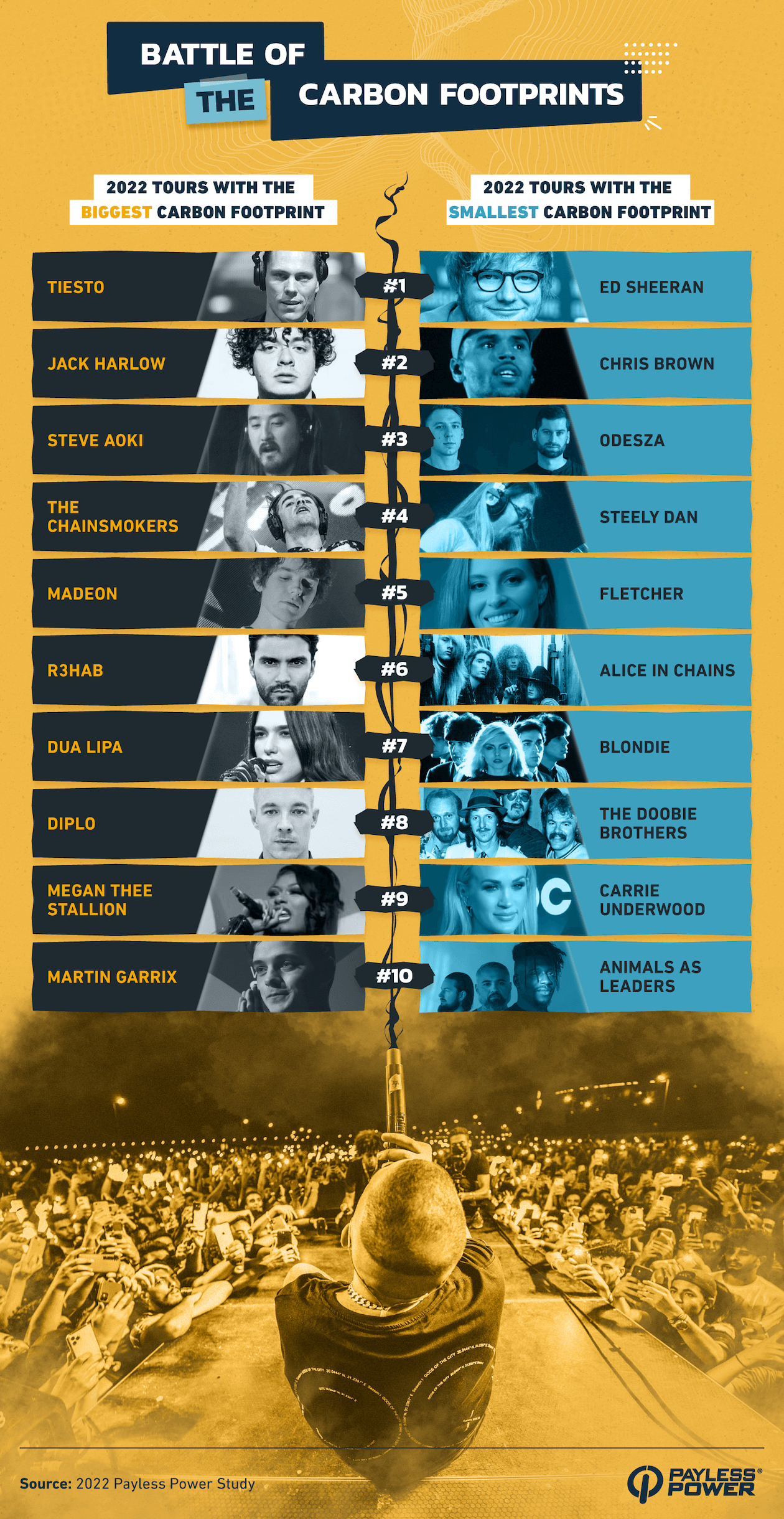 International DJs stomped their carbon footprints around the globe: seven of the 10 most polluting tours were by EDM DJs. Even the less-polluting DJs, like David Guetta, produced more pollution than almost half the artists in every other genre. Tiesto spun the most damage, producing nearly 4,000 metric tons of CO2 based on flight emissions. The artist with the second most flight emissions was rapper Jack Harlow.

Within each genre, the awards for biggest and smallest carbon footprints went to:

Of the 90 acts we analyzed, Ed Sheeran’s tour had the fewest emissions and less than 6,000 miles of travel.

Taking This Carbon Footprint on the Road

For touring musicians, efficient planning is key to lowering their carbon footprint. Having tour stops close together and limiting a tour to one continent keeps travel to a minimum, reducing environmental impact. Which artists have their tours planned to eco perfection, and which could use some efficiency lessons? 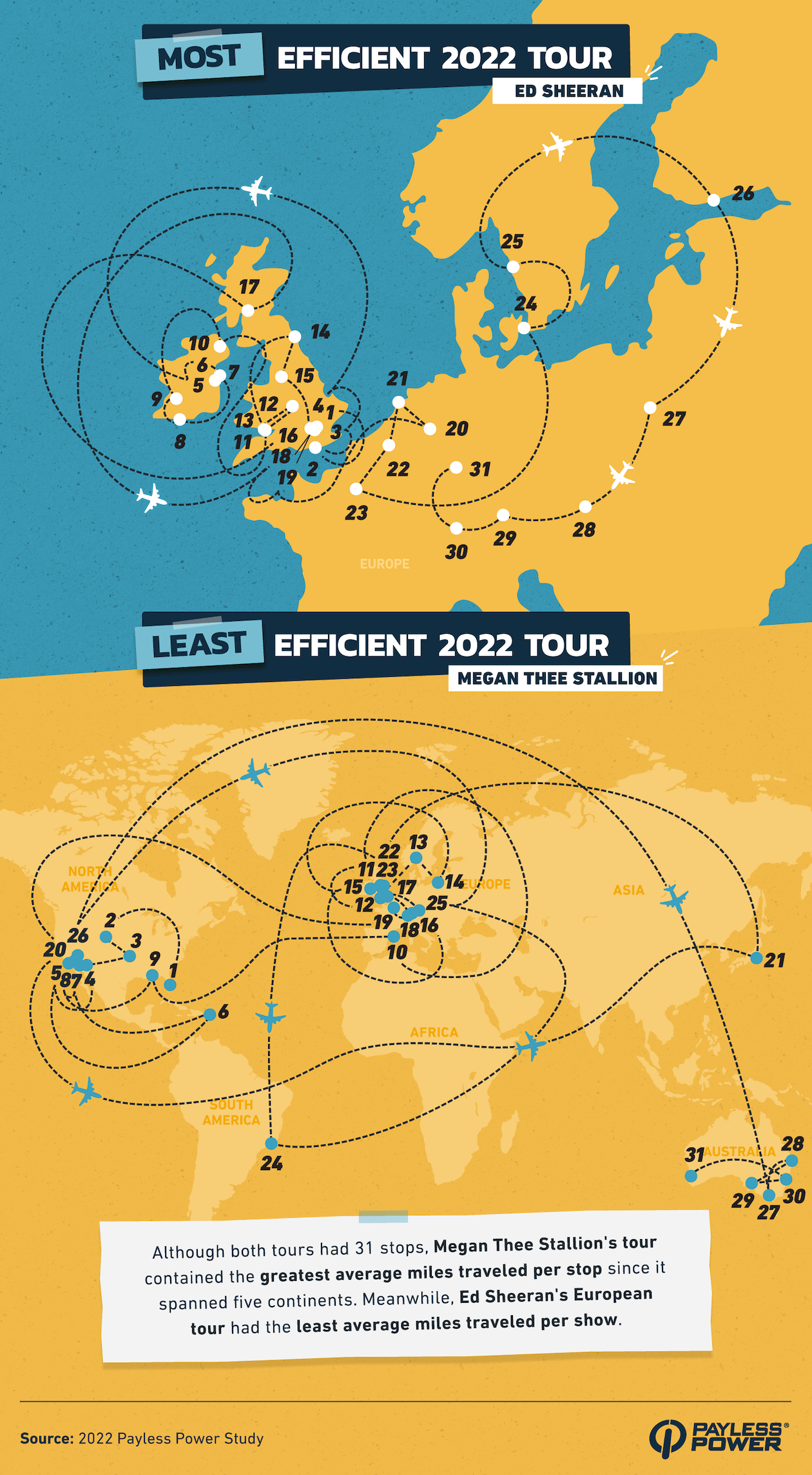 When it comes to tour efficiency, Ed Sheeran was No. 1. This pop star kept his recent tour limited to Europe, visiting 31 stops with an average distance of just 187 miles between shows. Megan Thee Stallion’s most recent tour also had 31 stops, but it spanned five continents and averaged 2,243 miles between shows, landing her in the bottom spot for efficiency. Interestingly, Ed Sheeran’s upcoming 2023 tour will span two continents, so we’ll see if he can maintain his efficiency across greater distances.

Air Quality and Other Swag

Watching your favorite musicians in concert is an exhilarating experience. But no matter how hard the band is rocking or the DJ is spinning, the environment shouldn’t pay the price for entertainment.

To ease a tour’s impact on the earth, artists can localize shows, plan efficient routes, and use low-emissions transportation. These smart planning tips can help touring musicians lower their carbon footprint so they can pump up the volume without pumping out the pollution. Then, when you buy your ticket for your favorite show, you can do so knowing both the music and the environment will be rockin’.

Based on Billboard rankings, we analyzed 2022 tour dates from popular artists across six different genres. To determine CO2 emissions from driving, we based calculations on a tour bus that averages 8 mpg. Flight CO2 emissions were based on a plane producing 53 pounds of CO2 per mile.

Payless Power is aware that this list is not conclusive to the biggest offenders — only the biggest and smallest offenders according to the study conducted. All calculations are based on a standard estimation according to distance traveled, so efficiency of specific artists’ private jets or tour buses may vary in actuality.

Payless Power offers Texans reliable, pay-as-you-go electricity service at a low cost. Whether you live in a large city or small town, we can save you money today.

Do you love rocking out at concerts and speaking out on climate change? Feel free to share this article with anyone you’d like. We just ask that you do so for noncommercial purposes only and provide a link back to this page to give the authors their due credit.