The Best Places to Fill Up

A gas station may seem like an odd thing to feel passionate about, but many major and regional gas chains have developed cult-like followings over the past decade. What’s driving this phenomenon, and how loyal are consumers to their favorite fuel spots? We surveyed 1,011 Americans about their gas station preferences to find out how devoted they are and why.

As with grocery stores and big box retailers, many Americans have a definite preference when it comes to gas stations. Which chains rank highly, and which are low-grade?

Of the 25 gas station chains we asked them about, Americans chose Costco as their favorite. With locations in almost every state, Costco offers familiarity and consistency, not to mention the convenience of getting your groceries, furniture, and gas all in one place. Other favorite stations were Love’s, Shell, and 7-Eleven, all of which also have a national presence.

Most loyal gas station customers visited their favorite station twice weekly to fill their tank or pop in for a snack. Gulf fans were especially loyal, visiting three times per week on average. They were also the most consistent, with 73% of them always choosing Gulf over other stations. In comparison, only 45% of people whose favorite fueling spot was 7-Eleven said the same of their preferred station, demonstrating a spectrum of gas station allegiance.

Passing Time at the Pump

Stopping for gas used to involve nothing more than a quick fill-up. But these days, many consumers take their time and enjoy the amenities many gas chains now offer. In which stations do customers spend the most time and money? 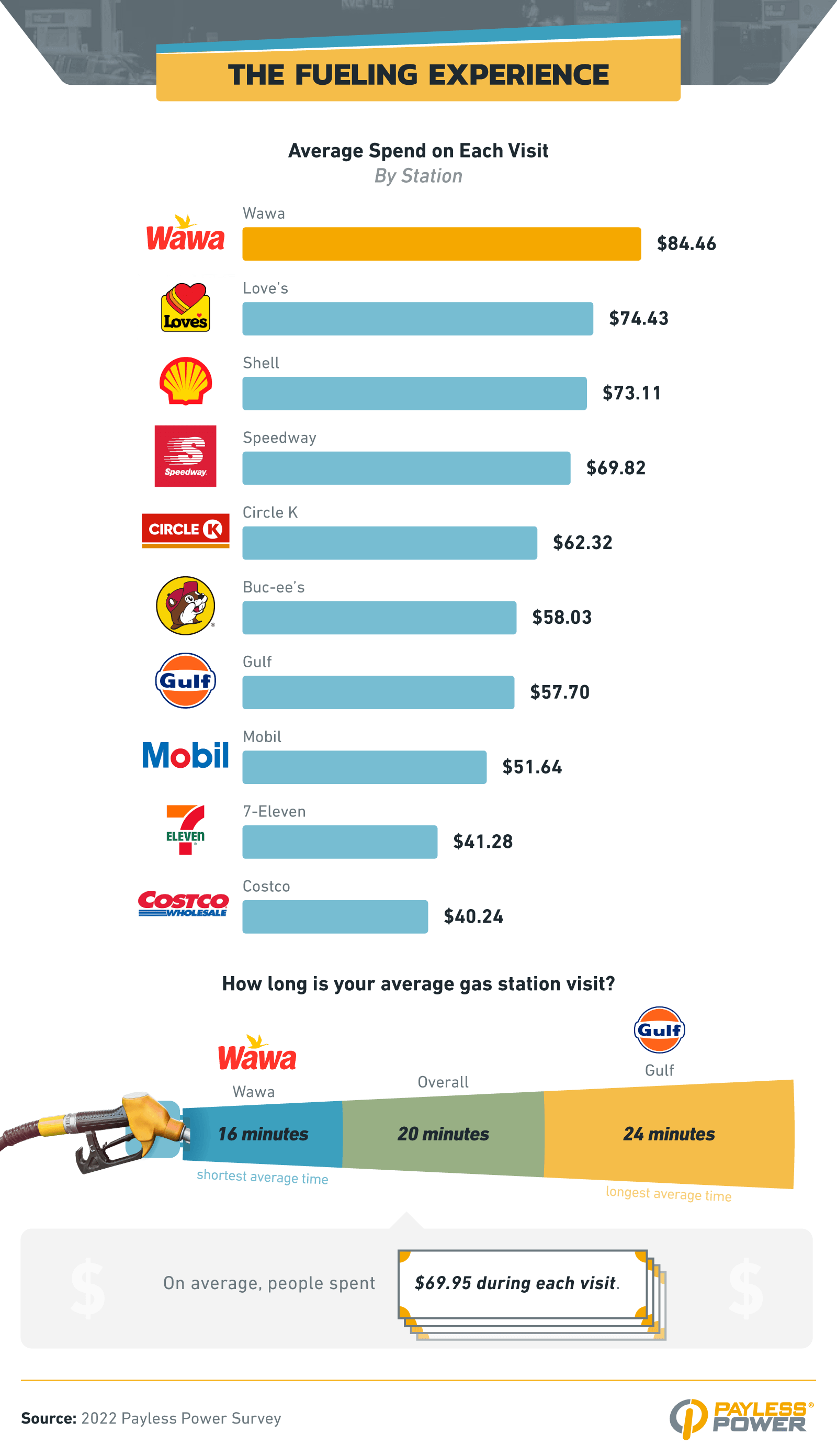 On average, customers spent 20 minutes and $69.95 per visit to their favorite gas station. Wawa loyalists were the quickest shoppers at just 16 minutes, but they outspent every other fan base, shelling out an average of more than $84 during each stop.

Filling Up the Fan Base

Spending significant time and money at gas stations can develop discerning tastes. What makes a gas station cult-worthy, and what drives customers out the door? 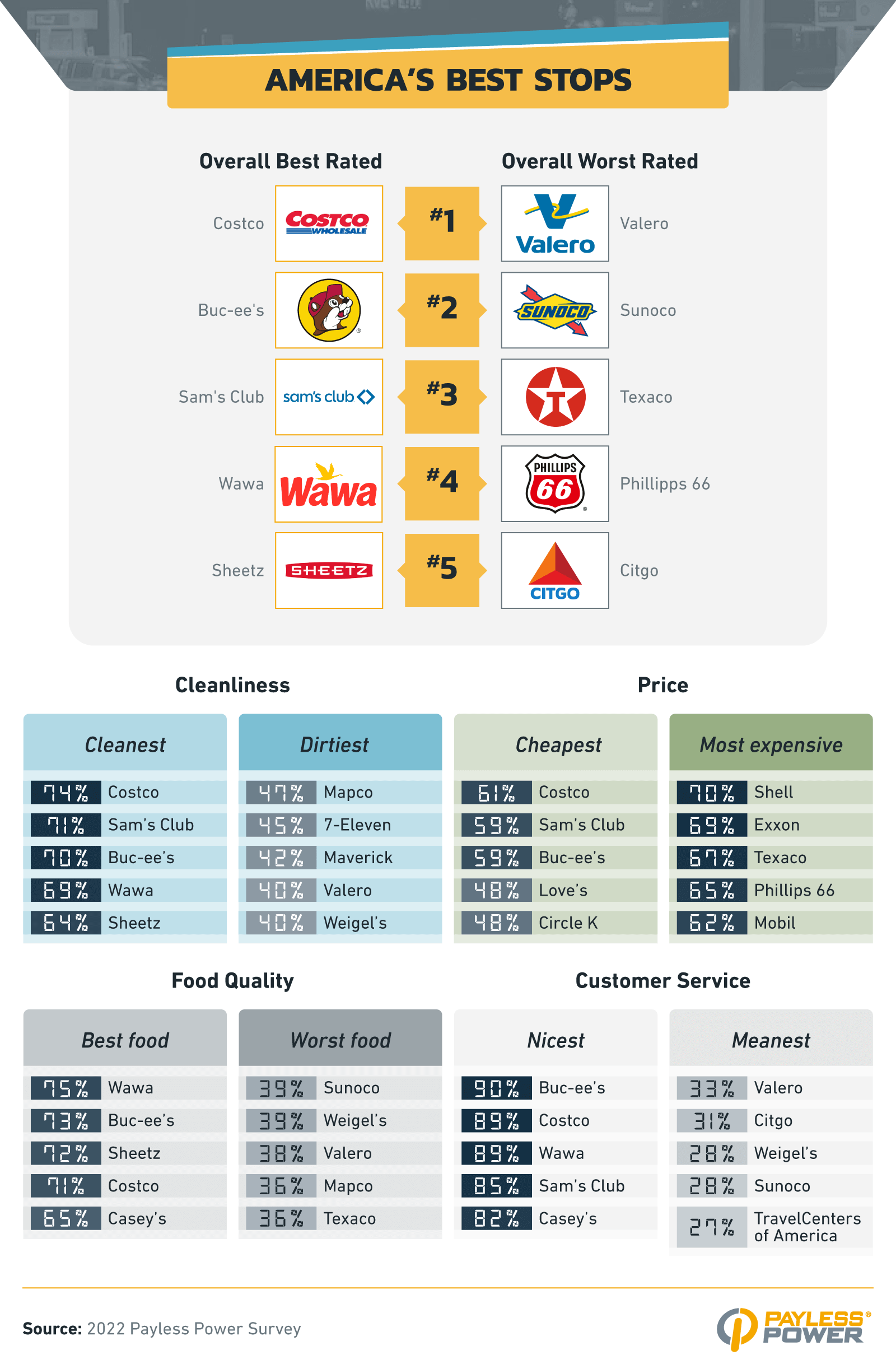 Customers are looking for much more in a gas station than cheap gas. While price is important, a clean station with quality food and customer service alone could earn a healthy following. For example, Shell was the third favorite station in the country, but 70% of consumers said they had the most expensive gas.

Between cleanliness, price, food quality, and customer service, only two stations — Costco and Buc-ee’s — made the top five in all four categories. They also took first and second place, respectively, for the overall best rated gas stations. Costo earned the top spot for both cleanliness (74%) and low prices (61%), while Buc-ee’s was No. 1 for its customer service (90%). Sam’s Club and Wawa came in third and fourth for best overall gas station, each having made the top five in three of the four categories. Wawa even earned the honor of having the best food (75%).

On the low end of the rankings, the top five worst rated stations were also among America’s 10 most hated.Maybe they should take some cues from what our respondents said they look for in a gas station. 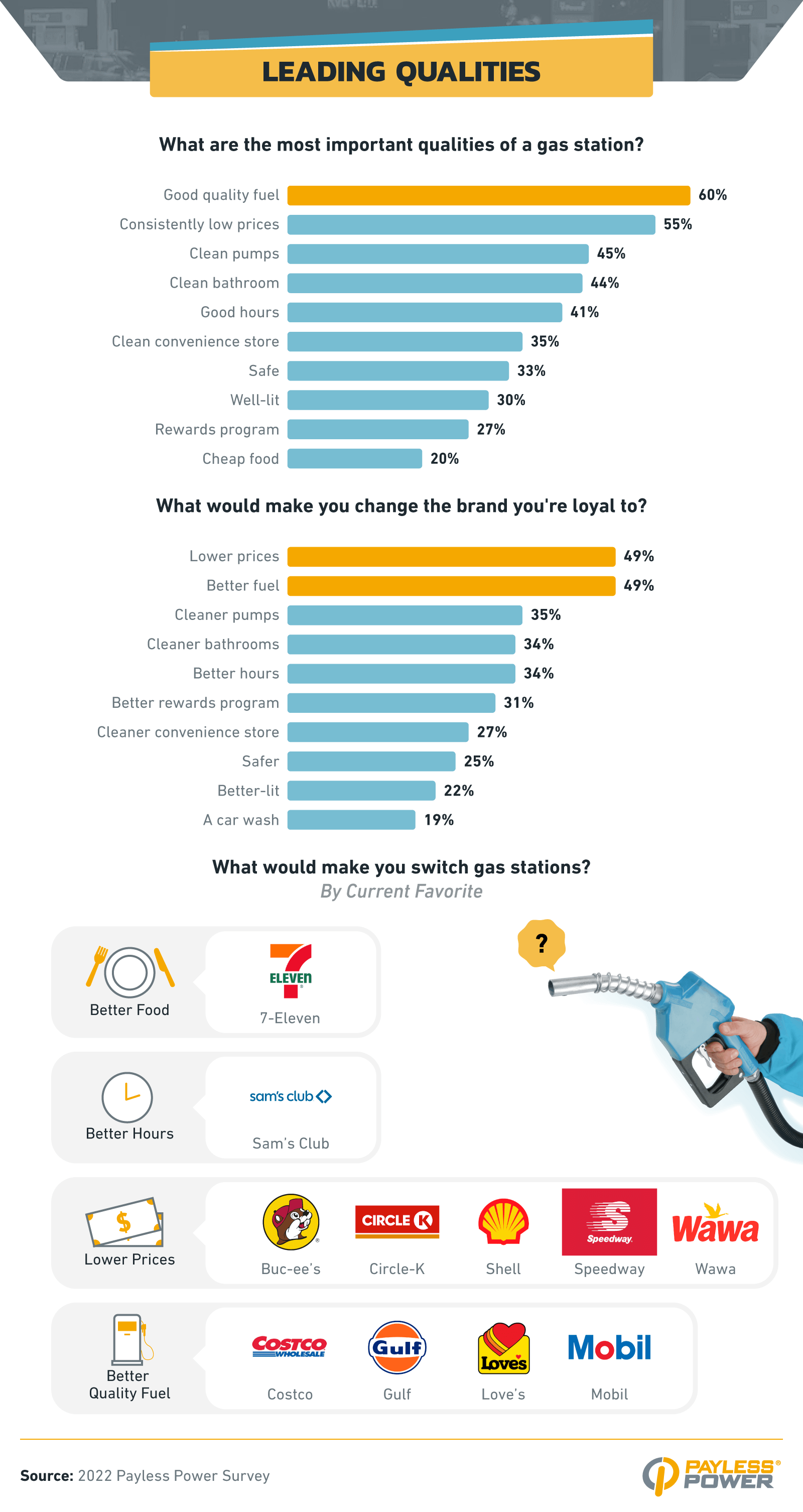 As gas stations offer more amenities and expand their food menus, so too are they growing their fan bases. Steadfast station supporters will drive significantly out of their way to patronize their preferred station and happily part with a considerable amount of money once there.

Nationwide chain Costco’s cleanliness, food, and customer service earned its place as the country’s most preferred gas station. Regional brands like Buc-ee’s and Wawa offered the same, while their iconic local experiences have also afforded them many devoted followers. So, the next time you go on a road trip, stop at a few different gas stations and see how your preferred station measures up to the rest.

We surveyed 1,011 Americans about their gas station preferences. Of those surveyed, 10% were baby boomers, 22% were Gen X, 43% were millennials, and 25% were Gen Z. Additionally, 57% were men, and 43% were women. Respondents were required to correctly answer an attention-check question during the survey to prove they were taking it seriously.

Payless Power offers Texans reliable, pay-as-you-go electricity service at a low cost. Whether you live in a large city or small town, you can save money on energy today.

Are you a Buc-ee’s buff, Wawa groupie, or Sheetz head? Feel free to share this article with anyone you’d like. Please do so for noncommercial purposes only and provide a link back to this page to give the authors their due credit.