Discovered in 1891 on a duck hunting trip on the southwest shoreline of Galveston Bay by the three Minnesotan Myers’ brothers, Texas City has always been seen to have potential as a major port. After dredging and deepening multiple Gulf channels and constructing rail lines to nearby cities, the port enabled shippers to get their product out to the national market. As a result, Texas City became a powerful tidewater terminal for the oil industry. With a growing population of over 50,000, residents have the opportunity to participate in a deregulated electricity market because of their location, where they can have their pick from different Texas City electricity companies instead of being cornered into one option.

Texas City has plenty of fun to offer for people of all ages and interests. Head over to the Texas City Museum to learn about the history of the town and see some fascinating model railroads. Ready for a staycation? Rent a kayak at the Texas City Dike and see if you can spot any dolphins in the Galveston Bay. And the Tanger Outlets of Houston certainly never disappoint with over 80 stores to shop at. For the residents and businesses of Texas City, receiving affordable and dependable energy is important for maintaining the pace of everyday life.

The average rate charged to Texas City residents for their energy consumption is 11.5 cents per kilowatt-hour, an expense that is half a cent less than the average rate paid nationwide. Thus, city residents are able to spend slightly less on electricity than the rest of the nation. Even so, there is ample opportunity to save more if they take advantage of the deregulated energy market and switch to the provider and plan that offers them the greatest benefits.

Payless Power provides the best prepaid and standard electric plans with no cancelation fees and no deposit in the Texas City, TX area. Since 2005, Payless Power has been helping people get a better energy rate and save money on their average electric bill, regardless of income or credit history. As a family-owned electric provider and not a giant electric company in Texas City, we take great pride in serving our customers with care and respect. 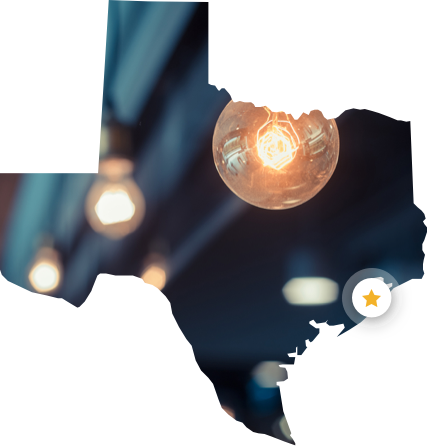 Q: How much does electricity cost in Texas City?

Q: How much does electricity cost in Texas City?

Q: How do I choose a Texas City energy plan?

Q: How do I choose a Texas City energy plan?

Texas City customers and companies seeking to save smart money on their utility bills today can choose from a variety of electricity plans and rates, whether prepaid, fixed, or variable plans over terms of 12 months, 24 months, 36 months, and more. Enter your zip code here to start shopping for Texas City electric companies and prices. Then review and choose the details of the plan that best suits your needs: Fixed-rate plans are recommended for most customers since the price is set for the duration of the contract. No matter what the weather, natural disasters, or market volatility is, your rate will remain the same. Variable-rate plans offer more flexibility but rates may change on a monthly basis based on market factors. Consumers who require more freedom and flexibility can opt for prepaid plans or no-deposit plans.

The electric utility to which you belong can be determined by your zip code address, where you live in general. If a Texas City resident experiences a power outage due to severe weather, downed power lines, or damaged poles, they should contact Texas-New Mexico Power.

As energy has been deregulated in Texas City, you have the freedom to choose who you buy electricity from but you cannot choose the company that transmits and delivers electricity to your home. Texas has more than 40 electricity providers, known as Retail Electricity Providers (REPs), that supply energy to homes and businesses. Some of these are Gexa Energy, Cirro Energy, and Payless Power.

Q: Who has the cheapest electricity rates in Texas City?

Q: Who has the cheapest electricity rates in Texas City?

Here’s a list of Texas City’s cheapest electricity plans: Payless Power’s prepaid plan costs $0.161 per kWh for a month’s usage, while Frontier Utilities and Gexa Energy offer fixed rates for 12 months for $0.089 per kWh. TriEagle Energy offers green energy for $0.107 per kWh over a 12-month period.