A cheaper way to buy electricity in San Angelo

In the heart of Texas lies San Angelo, a modest city with a population of over one-hundred thousand. Originally, San Angelo was called Santa Angela and served as a settlement across from Fort Concho. The city represented a trade center early on but grew quickly as the various railways throughout the state were constructed. The booming oil industry and emergence of educational institutions further enabled the city forward and today, San Angelo is a thriving center of culture and industry. Additionally, San Angelo is located within Texas’ deregulated electricity market in which the individuals and businesses residing within it are able to select their energy provider from the various companies that serve the state.

San Angelo has a number of exciting points of interest with plenty to offer both residents and visitors. Within the city are the San Angelo State Park and the San Angelo Nature Center, each making for a pleasant outing with the family in the great outdoors. There are also some accessible historical destinations like Fort Concho, which has both guided and self-guided tours, along with rotating exhibits detailing a plethora of topics. The San Angelo Museum of Fine Arts may present a welcome change of pace for the afternoon while the Soco Taphouse and Brew Company is a great spot for an evening out. Given the many activities and services that the city contains, there is a need for dependable and affordable energy.

In comparison to the rest of the country, San Angelo is particularly efficient with energy. While the average American household consumes just over 908 kWh each month, those living in San Angelo only use 511 kWh. This contributes to the average electricity bill coming out to a very manageable $49. Even better, with the ability to pick and choose between the most affordable electric rates and plans by virtue of the deregulated electricity market, residents and businesses of San Angelo can save even more.

Payless Power provides the best prepaid and standard electric plans with no cancelation fees and no deposit in the San Angelo, TX area. Since 2005, Payless Power has been helping people get a better energy rate and save money on their average electric bill, regardless of income or credit history. As a family-owned electricity provider and not a giant electricity company in San Angelo, we take great pride in serving our customers with care and respect. 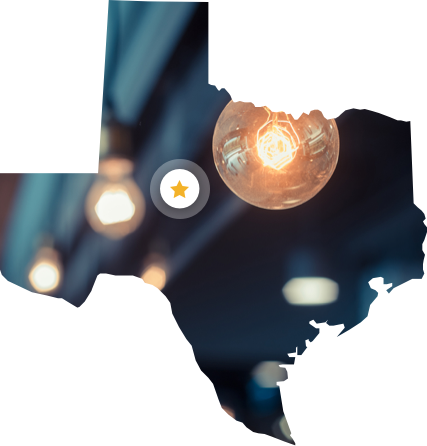 I love this electric company. It’s easy to set up and everything is user friendly. I recommend this to anyone looking for a good electric company that Payless power is the way to go.

Makes the payment part hassle free and wonderful because its done with the click of a button!

Q: How much does electricity cost in San Angelo?

Q: How much does electricity cost in San Angelo?

Q: How do I choose a San Angelo energy plan?

Q: How do I choose a San Angelo energy plan?

Whether you live in San Angelo or are moving there, you have the power to choose your home’s electricity provider. First, you need to determine your usage because electric companies use a single usage rate to quote the price per kWh.  Use an online marketplace and enter your zip code to find the cheapest electricity rates. It will also display the terms or duration, the plan type (fixed-rate, variable-rate, or prepaid), and the electric company.

We recommend fixed-rate plans since the rate remains the same throughout the contract period. Your rate won’t be affected by weather and natural disasters, nor by market fluctuations. A variable-rate plan, however, is flexible, but rates may fluctuate based on market conditions. A prepaid energy plan with no deposit is an ideal choice for budget-conscious consumers. As an alternative, you can also choose a green energy plan that provides sustainable, renewable energy.

Customers have the option to choose from a variety of electric companies that offer cheap electricity rates. However, you should keep in mind that electricity is delivered to your home by a transmission and delivery utility, regardless of which energy provider you choose. San Angelo’s authorized utility is Oncor. It maintains power lines and other infrastructure and restores power after outages. You can report or track an outage to Oncor’s storm center here.

Q: Who provides the cheapest electricity provider in San Angelo?

Q: Who provides the cheapest electricity provider in San Angelo?

If you’re shopping for the cheapest electricity rates in San Angelo, here are the top companies offering the most affordable price and plan: Just Energy offers the lowest at $0.072/kWh for a 12 months term. While Frontier Utilities, Express Energy, and Gexa Energy all offer $0.073/kWh for a 12-month term.

If you’re seeking convenience, prepaid electricity offers no deposit and no credit card required, with same-day activation. With only $0.144/kWh for a 12-month prepaid plan and $0.157/kWh for single-month use, Payless Power offers the best deal on pay-as-you-go energy.