One of the top electric companies in Midland TX

Named for its position in relation to El Paso and Fort Worth, Midland was established in the late 1800s as a station along the Texas and Pacific Railway. It is located to the east of the state and grew out of a small town with the discovery of oil in the region in the early twentieth century. Over time, Midland watched as its population grew to reflect its flourishing economy, resulting in a population boom that has established the city as one of the largest in the state with a population of nearly one-hundred and forty thousand. As it stands, Midland lies within the Texas deregulated electricity market which grants its residents the ability to select an energy provider from the numerous service companies that supply the state with electricity.

Midland is home to a number of points of interest for visitors and residents as well, offering historic and natural stops that can provide an enjoyable break from everyday life. For families, the Sibley Nature Center, Susie’s South Forty Candy Factory, and even the childhood home of former president George W. Bush can make for a fun outing. Midland also has certain spots that capture the city’s rich past including the Haley Library and History Center in addition to the Permian Basin Petroleum Museum. In order to enable these and the other activities required of everyday life, Midland depends on affordable and reliable energy.

Payless Power provides the best prepaid and standard electric plans with no cancelation fees and no deposit in the Midland, TX area. Since 2005, Payless Power has been helping people get a better energy rate and save money on their average electric bill, regardless of income or credit history. As a family-owned electric provider and not a giant electric company in Midland, we take great pride in serving our customers with care and respect. This is why we’re considered one of the best electric companies in Midland TX. 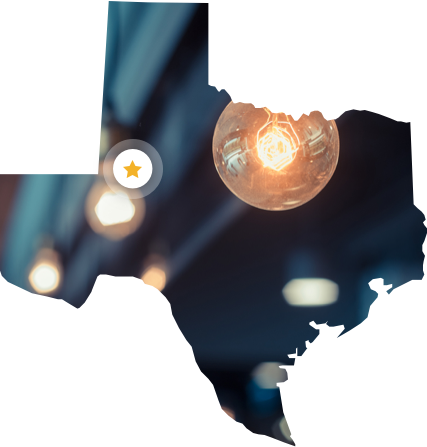 Took me Under 5 minutes! Awesome! Quick, easy and convenient!

I love that it sends me a text message letting me know where I’m at and that it saves me money when my balance is above 35 dollars it’s very convenient and I recommend it to anyone else that doesn’t have it.

Q: How much does electricity cost in Midland?

Q: How much does electricity cost in Midland?

Midland residents spend about $150 a month on electricity to power their homes. Compared to national expenses paid monthly, city residents can expect an extra $37. The reason is likely that Midland households have an average of 1,656 kWh of electricity consumption, which is larger than the national average of 700 kWh.

For commercial consumers, the average Midland commercial electricity rate is 10.41 cents per kWh (6% lower than the national average).  If the average commercial monthly usage was 8,1085 kWh, that would make the average bill around $852.

Q: How do I choose a Midland energy plan?

Q: How do I choose a Midland energy plan?

Texas has many online marketplaces that offer dozens of low-cost electricity plans from the most reliable retail energy providers (REP). You can choose either of the two plans, Fixed Rate or Variable Rate.

For a fixed-rate plan, your electricity rate will be locked in for the duration of your contract. At the beginning of your term, you will agree to a set rate that will not change until the end of your contract. There is also a choice of several contract lengths, typically ranging from three months to three years. This plan offers both security and consistency.

You can also opt for a variable-rate plan. Unlike a fixed-rate plan, this plan does not include a set energy rate. If you opt for this plan, your rates are subject to changing market conditions. In other words, you’ll receive lower rates during certain times of the year but pay higher rates at other times. Also, this option runs on a month-to-month basis rather than a fixed-term agreement.

Q: Who provides electricity in Midland?

Q: Who provides electricity in Midland?

Energy providers and utilities serve different purposes since deregulation. In the past, utilities controlled the entire process, from the transmission to distribution to energy sales. Utility services like Oncor now transmits and distributes, while energy providers like Payless Power buy or generate Midland’s energy. For instance, you would contact the utility if there were a power outage. While shopping, it’s important to keep this distinction in mind.

Midland electricity rates are available from a variety of providers. Payless Power, 4Change Energy, Gexa Energy, and TXU Energy are some of the most popular providers in the Midland area.

Q: Who has the cheapest electricity rates in Midland?

Q: Who has the cheapest electricity rates in Midland?

In the Midland, TX area, Payless Power offers the best prepaid and standard electric plans with no deposit and no cancellation fees. Payless Power has been helping people save money on their average electric bill since 2005, regardless of income or credit history. Payless Power is considered the best provider for prepaid “no deposit” plans. Other companies currently offering the cheapest electricity rates in Midland are Gexa Energy, TriEagle Energy, Pulse Power, and 4Change Energy.