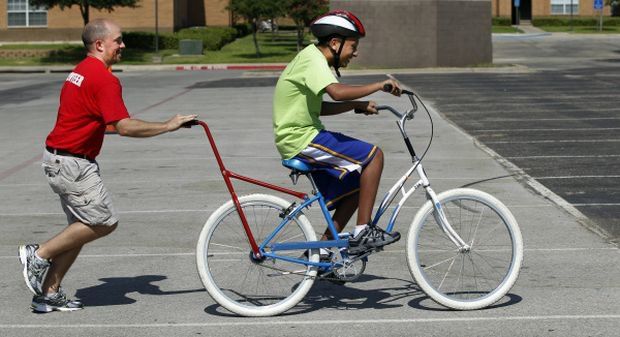 Payless Power, a locally-owned and family-run business, believes in serving the community. This summer, they were proud to participate in the Lose the Training Wheels program that holds nearly 90 camp sessions all over the United States and Canada.

During the week of July 11-15 Payless Power employees participated in the second annual Lose the Training Wheels bike camp held at The University of Texas Arlington activity center. Working in partnership with the Down Syndrome Partnership of Tarrant County, Lose The Training Wheels, inc. is a non-profit organization whose mission is to teach children with disabilities to ride conventional two wheel bike and become lifelong independent riders.

Payless Power employees Julie Williams, Parisha Green, Alicia Short, Jason Bryan, Gladys Lua, Sandra Salinas, Samantha Stokman, and Kennard McKenzie volunteered as spotters. The children they worked with rode special bikes designed to progressively teach them how to balance on a bicycle. As the kids went through the camp it was up to the spotters to encourage them in their progress and help the kids keep their balance on the bikes.

We asked Payless Power employee volunteers to share their favorite and most memorable moments. For Sandra Salinas it was watching a little boy paired to work with our very own Brian Young refuse to ride his bike until he received a hug from Brian. Julie Williams bonded with a boy named Ahmad who refused to let anyone else spot him while she was there. Jason Bryan bonded with several children one of them was Kristen a young girl who rode in the Special Olympics and another was Lewis. One special moment for Jason was Lewis repeating his name. For Kennard McKenzie a young man by the name of Jerry showed him the meaning of the word determination. “Something was wrong with his legs he didn’t have a normal walking motion and had never ridden a bike before. I ran with him side by side in the parking lot and he caught on really quick.”